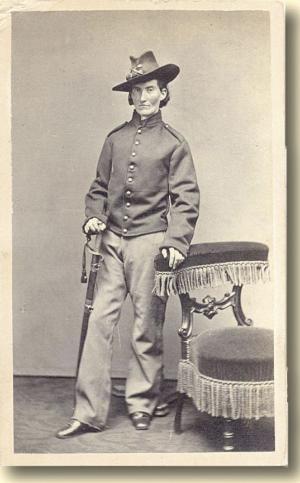 Onofrio Castiglia, The Winchester Star
The Associated Press
© May 24, 2015

When considering the millions of men who fought in the American Civil War, one local group highlights the fact that some of them were not men at all — but women, in disguise.

On May 15, Steve Killings, board president of The Academy for Veteran Education and Training — an educational nonprofit group located at Historic Jordan Springs — said that the organization is trying to erect a monument to honor the more than 500 women who posed as men so they could fight.

According to the Civil War Trust, more than 3 million soldiers fought in the war (about 620,000 lost their lives, nearly as many as all other American conflicts combined).

Killings said that there is no memorial anywhere dedicated to the little-known group of women who fought as valiantly as their male counterparts, and not as nurses or seamstresses, but as combat soldiers.

"There have been 513 positively identified women who fought in the war," Killings said. "It's a field that's not very well documented because women had to hide their identities."

According to Killings, Tonie Wallace and Greig Aitken — the owners of Historic Jordan Springs — are donating a portion of their land to the public trust for construction of the monument.

He said that Jordan Springs is an ideal spot, as it is close to battlefield sites in Pennsylvania, Maryland and Virginia and a scenic drive from Washington, D.C.

"This area is Civil War history-central," Killings said. "It really is a perfect place for (the monument)."

Apart from being one of a kind, Killings said the monument — titled Glory Honor's Stone — will also stand out in that it will house a data depository where academics and historians can preserve collections of related documents and artifacts.

An online funding campaign has been launched in support of the monument. A stated goal of the fundraising is to "inspire and validate all American female soldiers now and in the future for their brave service and sacrifices."

The fundraising is being done through razoo.com — a crowdfunding website — and the goal to be reached is $75,000 in three months.

Killings said that the project got underway at Jordan Springs on May 8, when representatives of U.S. Congresswoman Barbara Comstock, R-10th, and state Sen. Jill Vogel, R-Upperville, attended a meeting for the project.

Brig Gen. Wilma Vaught, founder of the female veterans memorial in Arlington, was also present at the meeting, Killings said.

He said the monument will be accessible to the public and is meant to be a Virginia State Park, though he believes there is the potential for it to be a national monument.

"The idea is to make this a state park, but we're seeing interest on the national level as well."

Anyone wishing to donate to the project can visit razoo.com/story/Glory-Honor-S-Stone-A-Monument-For-Women-Soldiers-Of-The-American-Civil-War.

Additional information can be found on the monument's Facebook page at facebook.com/womenscivilwarmemorial.

(WHAS11) -- A national landmark divided.  On one side the Civil War's Union soldiers and on the other, the Confederate soldiers and one civilian, a woman by the name of Elizabeth Temms.

“This cemetery is simply an outdoor museum, a time capsule. Everyone in here has a unique story. Elizabeth Temms story is just a little bit more unique,” said J. Michael Higgs, with the Cave Hill Heritage Foundation.

At Cave Hill Cemetery in Louisville sits a tombstone with barely visible markings.  It’s the site of Temms burial.

Temms helped Confederate soldiers avoid a Union ambush on her plantation in Georgia.

“She alerted the confederacy that the union was sitting there and waiting for them so they were able to thwart their attempt and she was then thrown in jail by the Union forces,” said Higgs.

Temms was taken to a prison for the Confederates at 12th and Broadway in Louisville.

“General Sherman had no compassion when it came to sympathizers to the South. They were all cast in jail and Elizabeth Temms was thrown in an ice house on the prison grounds.” Said Higgs.

The Cemetery wants to restore Temms grave marker, and they explained why it's important to preserve a piece of history that is still divisive to this day.

Frances Clalin Clayton, woman who disguised herself as a man, “Jack Williams,” to fight in the Civil War, wearing uniform.

Known by her married name of Frances Clayton, she took up all the manly vices. To conceal her sex, she learned to drink, smoke, chew, and swear. She even gambled, and a fellow soldier declared that he had played poker with her on a number of occasions.

Frances and her Husband Elmer served side by side during the American Civil War until 1863, when he died in battle.