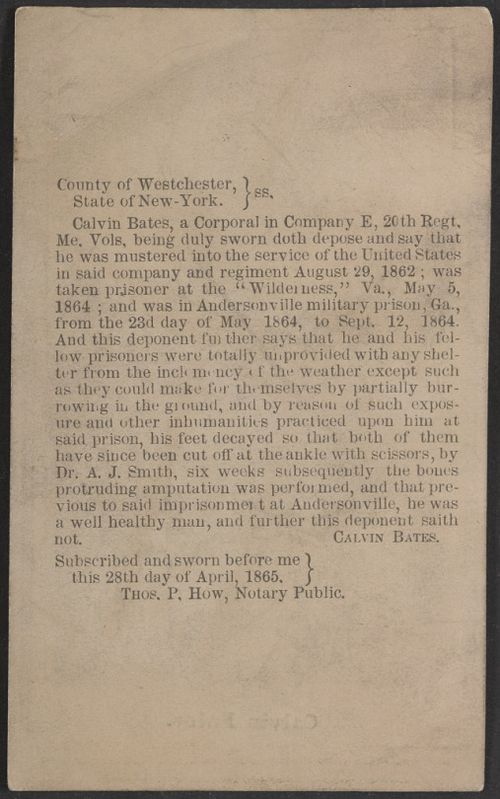 A Civil War Soldier’s PTSD (Post Traumatic Stress Disorder) The Story Of Angelo Crapsey - He embodied the image of the ideal soldier and possessed a luminous spirit that was contagious. Unfortunately, he lost himself in the tremendous force that was the Civil War.

Angelo Crapsey from Potter County, Pennsylvania eagerly enlisted in the Union army in 1861. Early in his military career, a sergeant in his unit committed suicide by placing his rifle between his knees and putting the muzzle in his mouth. This event would have a profound impact on Crapsey. As Crapsey started to engage in combat, his glorified perception of war began to fade away. “Rebels charged on us & we had to run, run for [our] lives…through an open field & we had showers of bullets sent after us.”

Crapsey became more withdrawn and the radiant spirit he possessed prior to the war disappeared. At the Battle of Fredericksburg Crapsey was taken prisoner and he spent time in at Libby Prison. While contained, Crapsey developed a case of lice infestation and frequently tried to rid himself of the pest even after they had subsided. After his release he fought at the bloodiest battle of the Civil War, Gettysburg. Upon his discharged, he returned back home to Pennsylvania were he experienced illusions, involuntary ticks and violent fits. On August 4, 1864, Crapsey said he was going out to hunt but instead stuck a gun in his mouth and shot himself; the same way the sergeant had done three years prior. Major General Thomas Kane said that he “loved no one of his men more than Angelo. He came up to his ideal of the youthful patriot, a heroic American soldier.”

Just like the soldiers in the Great War, Angelo had experienced involuntary ticks and violent fits. World War One soldier’s ticks and fit were attributed to constant bombardment at battles like Verdun and Somme. Angelo fought at Gettysburg, the sight of the largest artillery bombardment in North American History. While the bombs never physically harmed him, they drove him to insanity. Angelo experienced a change in personality, diminished personal relationships, a loss of previous interest, flashbacks, disturbing memories, negative emotions and he associated the negative trauma to himself which created a sense of self hatred. It got to the point where Angelo could not find a way out of his own prison and the only solution was death. Angelo displayed numerous symptoms of post-traumatic stress disorder.

Civil War Dr. William Chester Minor - Possible PTSD Sufferer,   Surgeon And One Of The Largest Contributors Of Quotations To The Oxford English Dictionary

Accepted by the Union Army as a surgeon and served at the Battle of The Wilderness in May 1864, which was notable for the terrible casualties suffered by both sides. Minor was also given the task of punishing an Irish soldier in the Union Army by branding him on the face with a D for “deserter” his nationality later playing a role in his delusions.

After the Civil War, Minor saw duty in NY City. He devoted much of his off-duty time to going with prostitutes. By 1867, his behavior had come to the attention of the Army and he was transferred to a remote post in Florida. By 1868, his condition had progressed to the point that he was admitted to St Elizabeth’s Hospital a lunatic asylum in Washington DC. After eighteen months he showed no improvement.

He moved to the UK where he was haunted by paranoia. As a surgeon, Dr. Minor had seen the worst that war had to offer. He had experienced delusions and paranoid fits after the war and as a result Minor was diagnosed with “soldier’s heart,” an early form of PTSD. In 1872 Minor shot and killed a man in the streets of London. He claimed he had been experiencing a delusion where he was back on the battlefield and the man was an enemy soldier trying to kill him. Found not guilty by reason of insanity he was sent to Broadmoor Hospital, an insane asylum in Crownthrone. Arguably one the most intrusive symptoms of PTSD are flashbacks, re-living the event allowing them to experience it all over again.  William Minor’s incident could have been a result of post-traumatic stress disorder from his combat experience.

Devoting most of the remainder of his life writing for the Oxford English Dictionary. He was visited quite often by the widow of the man he had killed. The compilers of the dictionary published lists of words for which they wanted examples of usage. Chester provided these. His condition deteriorated and in 1902 he cut off his own penis. His health failed and he was permitted to return to the US, he was subsequently diagnosed with “Dementia praecox “. He died in 1920 in New Haven Connecticut

PTSD And The Civil War Soldier

The evidence of psychological effects and disorders as a result of combat is clearly illustrated in the suicides of the soldiers. Numerous soldiers took their own lives rather than live to see another fight. Many men wrote home telling their loved ones about the unfortunate souls that would rather die by their own hand then fight for a chance of survival.

Jacob Stouffer wrote about his friend Absolam Shetter saying, “he had been in trouble and at times in a State of despondency-this with the troubles and Excitements around us-deranged his mind and on yesterday morning ended his existence by hanging.”

Newell Gleason, a lieutenant colonel, was described as a fearless leader but had experienced nervousness and anxiety after the Atlanta Campaign. Gleason had difficulty sleeping and battled with depression. In eighteen eighty-six, Gleason committed suicide as a result of his time spent in the Union Army.

A majority of the suicide victims were Confederate veterans….Besides the fact that they lost the war, the South lost twenty percent of its population. Families were torn apart by this war. Fathers and mothers lost sons, brothers lost brothers and wives lost husbands. The men that were lucky enough returned from war found their homes and lands destroyed. They lost everything. The war and its surrounding events could have thrown the soldiers into a depressive state leading to psychological ailments.

Albert Frank was a soldier in the Union Army. At the Battle of Bermuda Hundred near Richmond, Frank was off the front line and sitting on top of a trench. He offered a drink from his canteen to a fellow soldier sitting next to him. While the soldier was taking his drink, a shell exploded and decapitated the man, covering Frank with blood and pieces of brain. Frank experienced a complete loss of cognitive functioning being unable to speak, communicate or understand his fellow soldiers. He was later found on the floor shaking and making bomb noises. The only thing he would say was “Frank is killed.” He was taken to the Government Hospital for the Insane in Washington D.C and declared mentally insane. Witnessing such an intense trauma had affected Frank greatly. He was re-experiencing and reenacting the event and he associated himself to the trauma in a negative way saying he was the one killed. These are indicators of post-traumatic stress disorder.