Gimme Back My Bullets 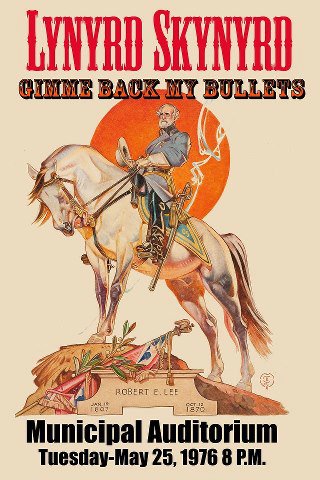 Y'all check out this Lynyrd Skynryd tour poster from 1976. Back when Ronnie Van Zant & Steve Gains were still alive and political correctness had not reared its ugly head in the US to begin to eradicate all things Southern.

Allen and Ginter was the Richmond, Virginia, tobacco manufacturing firm formed by John Allen and Lewis Ginter in 1865.

The firm created and marketed the first cigarette cards for collecting and trading. A line of cards featureing famous generals throughout history included many Civil War leaders.

See more at the Metropolitan Museum of Art

“They Came with Barbarian Yells and Smoking Pistols” Units were nicknamed for their apparent ability to yell during battle. The 35th Battalion of Virginia Cavalry ”White’s Cavalry” were given the nom de guerre of “Comanches” for the way they sounded during battle.

The Confederate yell was intended to help control fear. As one soldier explained: "I always said if I ever went into a charge, I wouldn’t holler! But the very first time I fired off my gun I hollered as loud as I could and I hollered every breath till we stopped." Jubal Early once told some troops who hesitated to charge because they were out of ammunition: “Damn it, holler them across.” ” — Historian Grady McWhiney (1965) Origins: The yell has often been linked to Native American cries. Confederate soldiers may have imitated or learned the yell from Native Americans, many of whom sided with the Confederacy.

Gone With The Wind - 74th Anniversary

"Gone with the Wind" had its grand premiere during the Christmas Season of 1939, just 74 years after the end of the “War Between the States” and Sunday December 15, 2013 marks the 74th anniversary of that wonderful-classic movie that opens with:

“There was a land of Cavaliers and Cotton Fields called the Old South. Here in this pretty world, Gallantry took its last bow. Here was the last ever to be seen of Knights and their Ladies Fair, of Master and of Slave. Look for it only in books, for it is no more than a dream remembered, a Civilization gone with the wind.”

Allegedly a photo of Thomas C. Dula a former Confederate soldier who was tried, convicted and hanged for the murder of his fiancée, Laura Foster. Many believe he may have been innocent & Ann Mellon killed her Cousin. Thomas had been involved with Ann & covered for her. The song "Tom Dooley" was written about him.

Link to the song…a classic

Confederate General James Longstreet of the Civil War died long before WWII.  However - his wife outlived him by many decades.  She, Helen Dortch Longstreet, at the age of 80 obtained a job at the Bell Aircraft bomber plant in Marietta, GA.  She was a riveter and assembler working on B-29s.   She refused to join the Union saying that there was no place for a Union in wartime.

She said, "I was at the head of my class in riveting school. In fact I was the only one in it."

She worked at the plant for 2 years and never missed a day.  This feisty lady said that WWII was "the most horrible war of them all.  It makes General Sherman look like a piker."  She was a real character in her own right.

Helen Dortch was born in Carnesville, Georgia, and attended Georgia Baptist Female Seminary (now Brenau College) and the Notre Dame Convent in Maryland. Having met Longstreet through her roommate, she married him on September 8, 1897, when she was just 34 and he was 76. She was widowed in 1904, childless.
Known as "The Fighting Lady." Helen was a champion of womens' rights, preserving the environment,  editor of a newspaper, first female postmistress in GA., and even ran for Governor as she was opposed to some racist positions the Governor was taking.

Prior to marrying Longstreet, she was the first woman in Georgia to serve as Assistant State Librarian in 1894. She also authored the "Dortch Bill" (which became law in 1896) to allow a woman to hold the office of State Librarian.

Before and after becoming a widow, Helen Dortch Longstreet devoted much time to ensure that General Longstreet was accurately portrayed by history. In 1905, she documented her husband’s account of the Civil War by publishing the book "Lee and Longstreet at High Tide."

She was a VERY remarkable woman.   Regrettably, she died in the mental hospital in Milledgeville, GA, in 1962

author of "Civil War Milledgeville, Tales From the Confederate Capital of Georgia"

N.C. Wyeth was born in Needham Massachusetts, His ancestor, Nicholas Wyeth, a stonemason, came to Massachusetts from England in 1645. Later ancestors were prominent participants in the French and Indian Wars, the Revolutionary War, the War of 1812, and the American Civil War, passing down rich oral histories and tradition to N.C. Wyeth and his family and providing subject matter for his art, which was deeply felt.

Newell Convers Wyeth (October 22, 1882 – October 19, 1945), known as N.C. Wyeth, was an American artist and illustrator. He was the pupil of artist Howard Pyle and became one of America’s greatest illustrators. During his lifetime, Wyeth created over 3,000 paintings and illustrated 112 books, 25 of them for the Scribner Classics, which is the work for which he is best known. The first of these, Treasure Island, was his masterpiece and the proceeds paid for his studio. Wyeth was a realist painter just as the camera and photography began to compete with his craft. Sometimes seen as melodramatic, his illustrations were designed to be understood quickly. Wyeth, who was both a painter and an illustrator, understood the difference, and said in 1908, “Painting and illustration cannot be mixed—one cannot merge from one into the other."-Wiki

Set during the American Civil War, the short begins with a Northern General (James C. Morton) assigning Larry, Moe, and Curly (as Operators 12, 14 and 15, respectively) to sneak behind enemy lines and obtain secrets. Disguising themselves as southern officers and taking the names Lieutenant Duck, Captain Dodge and Major Hyde, they insinuate themselves into the mansion of southern officer, Colonel Butts (Bud Jamison).

This is the first of several Stooge shorts in which they play enlisted soldiers. The Civil War was the setting for many of those shorts, and the Stooges fought for both sides (sometimes within the same short).