from The U.S. National Archives.

Faces of the Civil War

"In remembrance of the Union and Confederate soldiers who served in the American Civil War, the Liljenquist Family donated their rare collection of over 700 ambrotype and tintype photographs to the Library of Congress. Most of the people and photographers are unidentified. If you recognize a face from your family, a regiment, or a photographer's painted studio backdrop, e-mail the Library of Congress at mylocfeedback@loc.gov. "

A couple of grizzled noncoms at Manassas

Originally posted on Daily Observations of the Civil War

Watch as Bob Shimmin walks us through the process of creating a tintype photograph.
You can watch the interview with Bob Shimmin here
You can visit the Kalamazoo Valley Museum Website here

Photo from The Center for Civil War Photography

Thousands of Civil War photographs are available online for free. Many of these are scanned from the original glass plate negatives at ultra-high resolution. All Civil War photographs are now in the public domain, and reproductions can be used in any fashion by anyone. Users are strongly encouraged, however, to properly credit their sources for photographs and to abide by the rules and requirements of institutions that are providing images.

A Union volunteer strikes a (potentially tragic?) pose with a group of comrades. We hope those guys were friends!

From the Civil War Monitor

Photos from the war 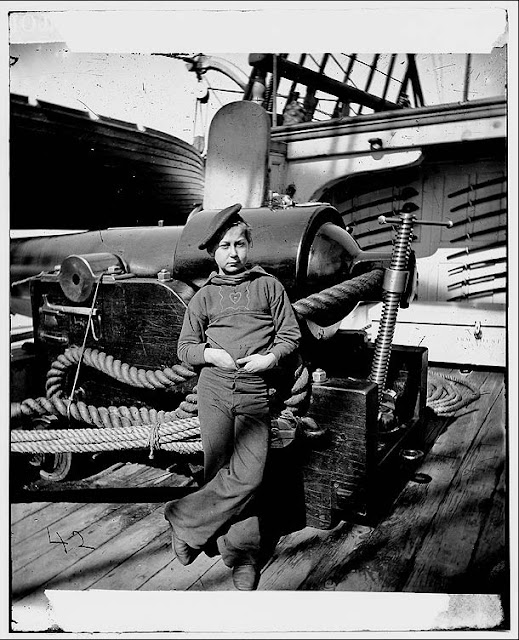 A great collection of Civil War photos. I was impressed with the details in this photo. Especially the wall of sabers and rifles on deck and at the ready

JOHNSBURG, N.Y. — A century and a half after his photographs gave the American public its first graphic images of Civil War battlefields, Mathew Brady's long-lost Adirondack birthplace has been found by a pair of history buffs.

Milda Burns and Glenn Pearsall tell the Post-Star of Glens Falls (http://bit.ly/v9P4aC ) that they used information from the 1830 census and Brady's letters to relatives to locate what's believed to be the family homestead's foundation in Warren County, in the southeastern Adirondacks 65 miles north of Albany.

Historians have long known that Brady was born to Irish immigrants in 1822 somewhere in the county, but the exact location wasn't known.

A small blue marker has been erected in the town of Johnsburg designating it as the famous Civil War photographer's birthplace.

Brady left Johnsburg when he was 16.

Controversial 1861 tintype photo of Andrew Chandler (L) and Silas Chandler (R). Did Silas fight for the Confederacy? Courtesy of Chandler Battaile via PBS.

The image on the Civil War tintype is at once both simple and striking: Two armed men in Confederate uniforms pose unsmilingly side by side, so close their legs touch.

But a closer look reveals something more startling. One of the soldiers is African American. The photograph reignites a long-standing historical debate: Did African Americans take up the Confederate cause, which defined them as slaves?

That question is at the center of Tuesday's episode of PBS' "History Detectives," which investigates the tintype and the identity of the two soldiers - Andrew Chandler, who was white, and Silas Chandler, who was black. Courtesy of Goodwill Industries of Middle Tennessee, Inc., and Richard Schaffer. - A recent discovery of what appears to be a lost image of the famous Confederate General, Robert E. Lee.

Richard Schaffer was only looking for a violin this month when he stumbled on a Civil Warphotograph up for auction on the Goodwill Industries Web site.

It was an elegant image of Confederate Gen. Robert E. Lee in his uniform, with a white beard, furrowed brow and circles of fatigue under his eyes.

Schaffer, a veteran collector who pilots a D.C. fireboat and runs a restaurant inHarpers Ferry, had never seen the image before. Was this a lost photo of Lee? Could it be a blockbuster discovery, a treasure among odds and ends?