Photo courtesy of the Kilburn familyFor 58 years, the Civil War-era bullet that took the right eye of Confederate soldier Willis Meadows, left, was lodged near his brain. Fired in 1863 at the siege of Vicksburg by Union soldier Peter Knapp, right, the bullet reappeared in 1921 when Meadows was stricken with a violent coughing spell. The one-time mortal enemies were reunited as friends.

Willis Meadows grasped his throat and began to choke.

Whatever was stuck in there wouldn't come out, and with coughing spasms growing violent, the 78-year old couldn't breathe. Just when he thought it was his time to die, something flew from his mouth, bounced on the wooden kitchen table and tumbled to a stop.

Trapped in Meadows' head for nearly 58 years, here was the Civil War bullet, a one-ounce slug that had taken out the Confederate veteran's right eye when he was just a boy.

"Coughs Up Bullet" was a national newspaper story in 1921. Eleven years later, in a "Ripley's Believe It or Not" cartoon, it was published around the world in 42 countries and 17 different languages.

Ripley missed the most unbelievable part of the story. After 58 years, Meadows would meet the Union soldier who shot him. 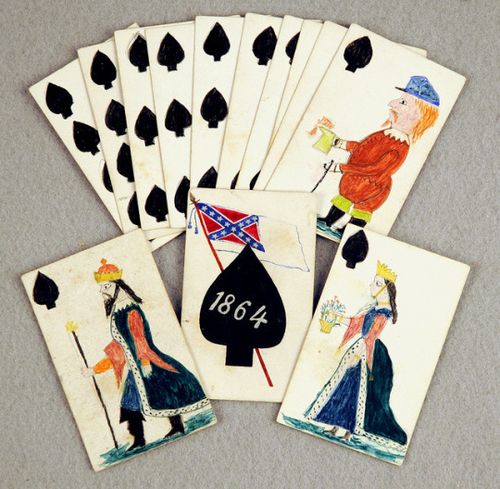 Swain Reeves credited his canteen for deflecting the bullet that struck him at Petersburg and preventing an even more severe injury.

Swain Reeves was a corporal in Company A, 7th N.J. Volunteer Infantry and was wounded at Gettysburg in July, 1863 and again at Petersburg in June, 1864. The last wound confined him to Lincoln Hospital in Washington, D.C.

This, and other artifacts from the U. S. Civil War, can be seen at The Macculloch Hall Historical Museum

Allen and Ginter was the Richmond, Virginia, tobacco manufacturing firm formed by John Allen and Lewis Ginter in 1865.

The firm created and marketed the first cigarette cards for collecting and trading. A line of cards featureing famous generals throughout history included many Civil War leaders.

See more at the Metropolitan Museum of Art

Prosthetic leg served in both the Confederate and Union armies

When Confederate Captain John Newton Ballard of Mosby’s Rangers lost his leg in battle in 1863 like many of his fellow officers he didn’t waste time fretting over his amputated limb. Instead, he acquired a second hand artificial leg and got back to war. Unfortunately, he was left literally without a leg to stand on near Halltown, Virginia, when his horse collided with a Union cavalry soldier’s mount and his prosthetic was crushed, making him the only Civil War soldier to lose the same leg twice.
However, he was about to have a stroke of luck. In March 1864, Union Colonel Ulric Dahlgren was killed near Richmond, Virginia, during a cavalry raid. He, too, had lost a leg in 1863 (in fact, the severed leg was given a military funeral and is still sealed within the wall of Building 28 in the Washington Navy Yard). Dahlgren’s body was found by 13 year old Confederate, who took his wooden artificial limb as a souvenir. The Yankee prosthetic made its way to John Ballard, who wore it in active service to the end of the war.
From CSA Today on Civil War Talk

Swett joined the Illinois court circuit in the 1850s, befriended Lincoln and became also a key organizer of the 1860 Chicago Republican National Convention and the 1864 presidential election.

When Leonard Swett had his first appearance on the circuit, he sought to introduce himself to Judge Davis, who at the time stayed at a small inn, along with other lawyers.

“Directed to Judge Davis’s room, he climbed the stairway of the hotel with some trepidation, being brought up to believe judges were men “of more or less gravity,” to be approached with “some degree of deference.”

His timid, uncertain knock was answered with a “come in,” uttered almost simultaneously. Swett entered the room and saw Davis and Lincoln in their nightshirts engaged in a pillow fight.

Davis, low and heavy-set, was leaning against the foot of the bed puffing “like a lizard.”

Lincoln who looked to Swett, compared to Davis, to be eight feet tall, was “encased in a long, indescribable garment, yellow as saffron, which reached to his heels, and from beneath which protruded two of the largest feet I had, up to that time, been in the habit of seeing.”
The only thing keeping the nightshirt from slipping off the tall angular frame was a single button at the throat.

“Certainly,” Swett later wrote, “the ungodliest figure I had ever seen.””

From All things Lincoln on Tumblr

Henry Clay Thruston was born on 4 May 1830 in Greenville, S.C.. He grew to 7 feet, 2 inches. Although often a height of up to 7 foot 7 and a half inches is attributed to him, photographic evidence  indicates a peek height of 7 foot and 2 inches.

Thruston and his family, which included four brothers who all over 6 foot tall, moved to Missouri, where he spent his early years. In 1850 he went to California for a while, coming home to Missouri via the Isthmus of Panama. At 23 he married Mary Thruston, a distant cousin. They would have four children.

When the Civil War broke out, Thruston joined the Confederate Army, serving as a private under Col. John Q. Burbridge in the 4th Missouri Cavalry. Thruston became a prisoner of war late in the conflict, but did not spend long in confinement, gaining parole at Shreveport, LA in June 1865.

After the war, Thruston reunited with his family in Missouri and migrated southwest to Texas, stopping when he got to Titus County. He bought 100 acres east of Mount Vernon and spent most of the rest of his life farming. He also toured with Barnum and Bailey circus at this time.

Old Abe, a tame bald eagle, was the mascot of the 8th Regiment of Wisconsin Volunteer Infantry in the Civil War and became a living symbol of the Union at war. He traveled with the 8th throughout the regiment’s participation in campaigns in the Western Theater from 1861 to 1864. Carried on a perch atop a shield, Old Abe was never wounded in any of the 37 engagements he participated in. He became famous for spreading his wings and shrieking at appropriate moments and was glorified by the Northern media. The 8th donated him to the government of Wisconsin, and Old Abe spent his postwar years living at the state Capitol, attending political rallies and being displayed at charity fundraisers.

Ah-ga-mah-we-zhig (Chief Sky) of the Lac du Flambeau Lake Superior Chippewas captured Old Abe when he was an eaglet in 1861. Chief Sky traded the eaglet to the McCanns of the Jim Falls area. The McCanns later sold the adolescent eagle to the Eau Claire company of the Wisconsin Volunteer Infantry who named him Old Abe. The Eau Claire company combined with others to form the 8th regiment, and Old Abe became famous as their mascot and a constant presence in battle, on the march and in camp. During his life with the regiment, Old Abe became known for pilfering from the camp, spreading his wings on command and dancing to music.

In 1863 the 8th Wisconsin presented Old Abe to the state, and the eagle spent the rest of his life captive at the Capitol building in Madison or on display for various political, social and cultural causes. Old Abe’s living conditions while in the government’s care declined over time and he suffered from exhaustion, exposure and malnutrition on a number of occasions.

In 1881 a small fire broke out in the basement of the Capitol, igniting stored paints and oils and filling Old Abe’s quarters with smoke. The flames did not reach Old Abe’s confines, but the smoke seemed to negatively affect his health. He sickened and died within a month.

After his death, the state had Old Abe’s corpse preserved by taxidermy. He was displayed at the Wisconsin Historical Society until 1903 when he was moved to the G.A.R. Memorial Hall in the Capitol. A fire the next year in 1904 consumed his remains.

During his life and after his death, Old Abe has been the subject of numerous semi-fictionalized accounts and tributes.