Shopie Koerner hears a gunshot outside her home in Belleville, Illinois the night before Lincoln is shot in Washington DC. Coincidence?

Her husband, Gustav Koerner, was a journalist, lawyer, politician, judge, and statesman in Germany and Illinois, and a Colonel of the U.S. Army during the Civil War. He was a friend of Abraham Lincoln and served as a pall bearer for Lincoln's funeral.

Jack LeChien, from the The Koerner House Restoration Committee, tells the story. The house was built in 1849 and is currently being restored. 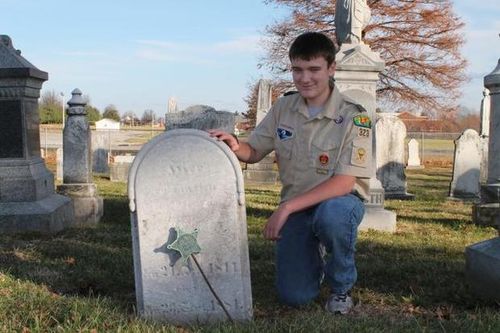 Members of the Col. Friedrich Hecker Camp #443 (SUVCW) participated in a living history day at the Gustav Koerner House in Belleville, Illinois, on Saturday, April 5, 2014.

Members from the Col. Hecker Camp #443 (SUVCW) participated in a living history day at the Gustav Koerner House in Belleville, Illinois, on Saturday April 5, 2014.

Gustav Philipp Koerner, also spelled Gustave or Gustavus Koerner (20 November 1809 –  9 April 1896) was a revolutionary, journalist, lawyer, politician, judge, and statesman in Illinois and Germany and a Colonel of the U.S. Army who was a confessed enemy of slavery. He married on 17 June 1836 in Belleville Sophia Dorothea Engelmann (16 November 1815 – 1 March 1888),[5] they had 9 children.[6] He belonged to the co-founders and was one of the first members of the Grand Old Party; and he was a close confidant of Abraham Lincoln and his wife Mary Todd and had essential portion on his nomination and election for president in 1860.

The event was held to celebrate the City of Belleville's 200th anniversary. More living history event are scheduled throughout the year.

Koerner's House is currently under renovation by The Belleville Heritage Society.

St. Louis County Parks and Recreation sponsored a two day Civil War Symposium on August, 26 and 27, 2012. There were presentations on the C.S. Hunley, Daily Life of a Civil War Soldier, Union Mounted Infantry and Death and Mourning in the 19th Century. We also had a tour of the Civil War in the West exhibit in the old Ordnance room.

Anyone who has toured the historic Civil War battlefield at Gettysburg understands how useful an audio guide can be.

Now, St. Louisans can download a free phone app that provides information about local events and locations tied to the conflict, said Angie Dietz, a spokesperson for the Missouri History Museum.

Based on the book "The Civil War in St. Louis" by William C. Winter, the app allows the user to:

• Use a GPS-enabled map to find historic places, and also follow recommended tour routes based on the user’s location.

• Listen to a narrator explain historic locations connected to the Civil War and relate background stories about those events.

The app currently is compatible with Android, iPhone, iPod Touch and iPad. To obtain the app — which is free — folks can visit the iTunes store or visit the Google Play store on Android and search for "Missouri History Museum."

Sergeant Major Frank Austin, representing the 117th Illinois spoke at the monthly meeting of the Lt. George E. Dixon Camp # 1962 of the Sons of Confederate Veterans on Thursday, December 1, 2011. The 117th was comprised of students and teachers from McKendree College in Lebanon, Illinois. Frank read from letters and journals sent home by regiment members and gave an insight into the daily life of a Union soldier. 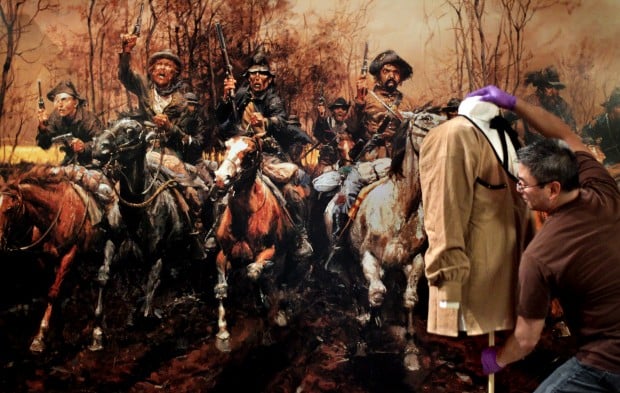 Mike Takaki, an art installer with Ely, Inc. carries a reproduction of a Confederate guerrilla shirt while building a display for the Missouri History Museum's 'The Civil War in Missouri' exhibit Tuesday November 8, 2011. The exhibit, marking the 150th anniversary of the Civil War and curated from artifacts in the museum's permanent collection, opens Saturday to visitors. Photo by Robert Cohen, rcohen@post-dispatch.com

The exhibit is the museum's contribution to a four-year national commemoration of the Civil War's 150th anniversary. Missouri, a slave state, shakily remained in the Union. But it was deeply divided by sentiments that played out in harsh social conflict and brutal guerrilla warfare.

The exhibit runs through March 2013. It is in the museum's main building in Forest Park, at Lindell Boulevard and DeBaliviere Avenue. Spread across 6,000 square feet of floor space are 187 artifacts, 251 images, 56 storyboards of explanatory text and 12 touch-screen panels. The images include old drawings, portraits, maps and original documents.

At the entrance, a jumbo TV screen cycles through the portraits and conflicting thoughts of 12 Missourians, six from each side, as war began. They include Jessie Benton Fremont, the influential and ardently Unionist senator's daughter and general's wife; and Sterling Price, a former governor who joined the rebel army.

Like the rest of the country during the Civil War, St. Charles County was a diverse, uncertain hodgepodge of emotion, ambition, violence, and economic and political motivations.

Channel 9 KETC will televise The Civil War in St. Charles County at 3 p.m. Sunday. After the broadcast, the program will be available online through the county's SCCMO-TV Cable 993 or online video on demand.