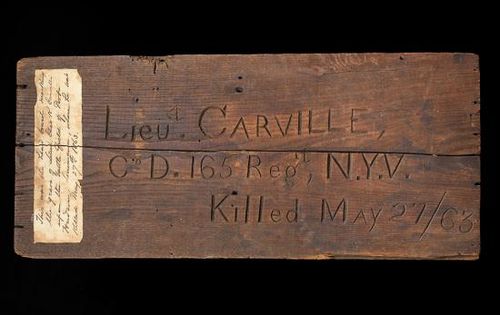 By Brian Albrecht, The Plain Dealer

The "Honor Those Who Served Act of 2014" would enable veterans service agencies, military researchers, historians or genealogists to request a free headstone or marker from the Department of Veterans Affairs (VA) for a veteran's grave.

Until 2012 the VA provided headstones for unmarked veterans' graves based on documentation of that vet's identity and service provided by these groups or individuals.

Honoring the Dead: What Military Headstones Can Tell Us

Honoring the Dead: Military Burials from Ancestry.com
By Amy Johnson Crow, on Ancestry
Though military headstones are relatively simple in their design, they can yield a surprising amount of information. In this set of slides, Amy Johnson Crow shares a bit of the history behind military headstones in the U.S., what they can tell us, and clues to look for in other types of tombstones.

The Belleville Chapter, Daughters of the American Revolution, placed a marker next to the grave of the son of Revolutionary War Col. John Thomas Jr. at 11 a.m. Saturday, march 24, 2014, at the Shiloh Cemetery in St. Clair County, Illinois.

There were five groups in uniform: the Sons of the American Revolution, Society of 1812, Union and Confederate Sons and a group of Civil War re-enactors, who conducted black powder gun salute.

Descendants of Col. Thomas attended, along with Stephen Korte, of Belleville, who did research on Thomas for his Eagle Scout project.

Here is a biography of Col. John Thomas Jr., provided by the Belleville Chapter, Daughters of the American Revolution:

Col. John Thomas Jr. was born May 26, 1751. He grew up in South Carolina, living first at Fishing Creek on the Catawba River, then, beginning in 1762, on Fair Forest Creek in the Upper or Broad River District. The area had to be defended constantly from marauding Cherokee Indians and other allied tribes. Just when it seemed a decade of self-defense had brought some peace and stability to the upper Piedmont, the Revolutionary War broke out in the northeast and swept southward.

Benjamin Henry Grierson (July 8, 1826 – August 31, 1911) was a music teacher, then a career officer in the United States Army. He was a cavalry general in the volunteer Union Army during the Civil War and later led troops in the American Old West. He is most noted for an 1863 expedition through Confederate-held territory that severed enemy communication lines betweenVicksburg, Mississippi and Confederate commanders in the Eastern Theater. After the war he organized and led the Buffalo Soldiers of the 10th Cavalry Regiment from 1866 to 1888.

The part of Colonel Marlowe, played by John Wayne in the movie The Horse Soldiers, is loosely based on Grierson.

Horse Soldiers was based on a novel by Harold Sinclair.

Grierson’s Home and grave are in Jacksonville, Illinois

(WHAS11) -- A national landmark divided.  On one side the Civil War's Union soldiers and on the other, the Confederate soldiers and one civilian, a woman by the name of Elizabeth Temms.

“This cemetery is simply an outdoor museum, a time capsule. Everyone in here has a unique story. Elizabeth Temms story is just a little bit more unique,” said J. Michael Higgs, with the Cave Hill Heritage Foundation.

At Cave Hill Cemetery in Louisville sits a tombstone with barely visible markings.  It’s the site of Temms burial.

Temms helped Confederate soldiers avoid a Union ambush on her plantation in Georgia.

“She alerted the confederacy that the union was sitting there and waiting for them so they were able to thwart their attempt and she was then thrown in jail by the Union forces,” said Higgs.

Temms was taken to a prison for the Confederates at 12th and Broadway in Louisville.

“General Sherman had no compassion when it came to sympathizers to the South. They were all cast in jail and Elizabeth Temms was thrown in an ice house on the prison grounds.” Said Higgs.

The Cemetery wants to restore Temms grave marker, and they explained why it's important to preserve a piece of history that is still divisive to this day.

John Weatherall Hodges enlisted in the "Tippah Farmers," Company H, 34th Mississippi Infantry, on March 18, 1862. In July 1862 there was a notation on the regimental muster roll that he was entitled to pay as a musician. He was captured at Lookout Mountain, Tennessee, on November 24, 1863.

Brad NettlesPolly Sheppard, a member of Emanuel AME Church, pulls weeds away from the gravestone of Louis B. Middleton on Friday. Middleton, who was black, was a cook in the Confederate Army.

Six months ago, Polly Sheppard was wandering through her church’s cemetery, taking inventory of the stone markers. A couple of steps in, she noticed a military-style headstone. Carved on its weather-worn face was the name Louis B. Middleton Confederate Soldier.

The stone seemed out of place to her, given that the burial ground belongs to the Emanuel African Methodist Episcopal Church of Charleston, regarded as the oldest black AME church in the South.ook.

A check of the state’s archives showed it wasn’t so strange after all: A Louis Middleton from Montague Street (the street was spelled with an “e” in the documents) worked as a cook during the war, and he applied for a South Carolina pension in 1923.

While the South and the nation are in the middle of celebrating the Civil War Sesquicentennial, historians say the involvement of the small percentage of blacks who participated in the Southern war effort is widely going unnoticed, largely because their role has become so politicized today.

“I think there are a lot of Confederate sympathizers who exaggerate the role of blacks in the Confederate military,” said Don Doyle, the McCausland professor of history at the University of South Carolina. “And a lot of skeptics who dismiss the idea that it was even possible.”

Astronomers are looking to the moon to try and understand why Confederate Lieutenant General Thomas J. “Stonewall” Jackson was gunned down by his own troops during the Civil War.

On May 2, 1863, Jackson was mistakenly shot and killed by his own troops two months before the Battle of Gettysburg. Historians have debated for 150 years how the soldiers of the 18th North Carolina regiment could not recognize their general. Don Olson of Texas State University and Laurie E. Jasinski, Texas State graduate and editor of The Handbook of Texas Music, Second Edition, decided to use astronomy to get down to the bottom of it.

A full moon allowed the soldiers to fight through the night, according to eyewitness accounts such as the one from Confederate Captain William Fitzhugh Randolph.

“The moon was shining very brightly, rendering all objects in our immediate vicinity distinct,” Randolph wrote in The Confederate Veteran in December 1903. “The moon poured a flood of light upon the wide, open turnpike,”

During the battle, Jackson rode ahead to scout out possible routes that could be used between the Union army and the fords and pontoon bridges. After they returned from their reconnaissance at about 9:00 p.m., a Confederate officer regiment spotted them through the trees by the moonlight and ordered his men to open fire. Jackson was then wounded by three bullets – two in his left arm and one in his right wrist.

Olson and Jasinski used detailed battle maps and astronomical calculations to determine how Jackson’s own troops mistook him for someone else. They determined that the 18th North Carolina was looking to the southeast, directly toward the rising moon, which silhouetted Jackson and his officers.

“When you tell people it was a bright moonlit night, they think it makes it easier to see. What we are finding is that the 18th North Carolina was looking directly toward the direction of the moon as Stonewall Jackson and his party came riding back,” Olson said. “They would see the riders only as dark silhouettes. Now, 150 years later, we can explain why they didn’t recognize this famous Confederate general. Our astronomical analysis partially absolves the 18th North Carolina from blame for the wounding of Jackson.”