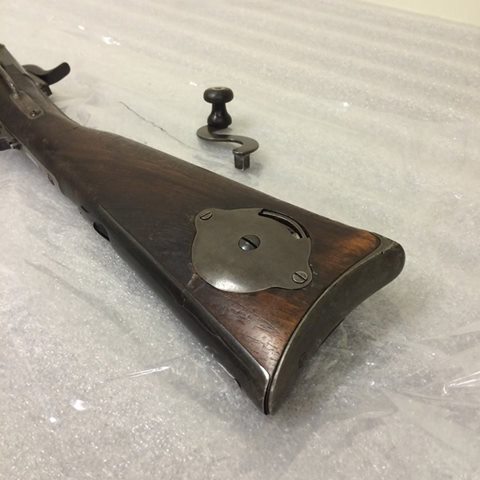 Look what we unpacked last week! This Civil War carbine was loaned to us by the National Park Service’s Springfield Armory site in Massachusetts for our upcoming exhibition on the history of coffee… but this isn’t just any gun. During or after the war, a clever soldier retrofitted the butt of the gun with a coffee mill for grinding on the go! Beans went in a small hole at the base, the crank was turned, and out fell fresh ground coffee. See this and many other incredible artifacts on display in COFFEE: The World in Your Cup & St. Louis in Your Cup opening the weekend of October 3 and 4. ‪#‎STLcoffee‬

Confederate soldiers were disparate for food at times. This recipe is from Phoebe Yates Pember, superintendent of one of the wings of Chimborazo Hospital in Richmond, Virginia.

"The rat must be skinned, cleaned, his head cut off and his body laid upon a square board, the legs stretched to their full extent and secured upon it with small tacks, then baste with bacon fat and roast before a good fire quickly like canvasback ducks."

How Peanuts Fed the Confederacy

Before the Civil War, peanuts were not a widely cultivated crop in the United States—Virginia and North Carolina were the principal producers—and were generally viewed as a foodstuff fit for the lowest social classes and for livestock. When they were consumed, they were usually eaten raw, boiled or roasted, although a few cookbooks suggested ways to make dessert items with them. The goober pea’s status in the Southern diet changed during the war as other foods became scarce. An excellent source of protein, peanuts were seen as a means of fighting malnutrition.

In addition to their prewar modes of consumption, people used peanuts as a substitute for items that were no longer readily available, such as grinding them to a paste and blending them with milk and sugar when coffee was scarce. “This appreciation was real,” Andrew F. Smith wrote in Peanuts: The Illustrious History of the Goober Pea. “Southerners continued to drink peanut beverages decades after the war ended.” Peanut oil was used to lubricate locomotives when whale oil could not be obtained—and had the advantage of not gumming up the machinery—while housewives saw it as a sound stand-in for lard and shortening as well as lamp fuel.

Peanuts became ingrained in the culture, going so far as to crop up in music. For Virginian soldiers wanting to take a dig at North Carolina’s peanut crop, there was:

The goobers they are small Over thar!

The goobers they are small, And they digs them in the fall,

And they eats them, shells and all, Over thar!

The humorous song “Eatin’ Goober Peas” also surfaced during the war years. (You can hear the song in full as performed by Burl Ives and Johnny Cash.)

Just before the battle the General hears a row,

He says, “The Yanks are coming, I hear the rifles now,”

He turns around in wonder, and what do you think he sees?

From: The Civil War Parlor on Tumblr

Essence Of Coffee In The Civil War

Essence Of Coffee In The Civil War- That’s Right, Not Coffee But The Essence Of It!

Two preservation experiments from the Civil War: condensed milk and essence of coffee. Condensed milk was milk that had been dried out into a liquid paste. One could add water to it and reconstitute it, then add it to coffee. Since the milk was pasteurized in the thickening process, this worked out rather well. Then, there was essence of coffee… they tried to do the same thing, by drying out huge vats of coffee into a thick brown sludge for canning. This was not quite as successful. In theory, one would take a bit of the essence-goo, mix it with water, and have instant coffee. In practice, the “essence” was so foul that most soldiers refused to drink it.

The Civil War Parlor on Tumblr

"The Way To A Man’s Heart Is Through His Stomach"

Mary Todd Lincoln cake is “courtin’ cake” — the very cake that the future first lady served in the mid-1800s to win over Abe Lincoln.

She served the cake to Lincoln as he came courting, and it was his favorite.

The story is told that Mary Todd’s aristocratic family was introduced to the cake when a French dignitary came to visit their Lexington, Ky., home and brought his own chef. The Todd family requested the recipe, and later Mary Todd took the recipe along when she moved to Springfield in 1839.

Some say the first lady continued to bake the cake when the Lincolns lived in the White House from 1861 to 1865, but White House chefs found it too plain for important guests. They made it into a layered cake with rich vanilla frosting instead of the traditional powdered sugar topping.

BLOODY FRACAS IN BEAUREGARD'S ARMY ABOUT A PINT OF WHISKY

"BLOODY FRACAS IN BEAUREGARD'S ARMY ABOUT A PINT OF WHISKY.--A fight occurred in Beauregard's army between the Border Guards and the Wise Artillery, when a number were wounded, including Capt. John Q. A. Nadenbush of the Berkley Guards, and Capt. E. G. Albertis of the Wise Artillery. The fracas arose in consequence of a woman named Bella Boyd refusing to sell a bottle of whisky to a soldier. She demanded two dollars for a pint bottle; soldier offered one; Mrs. Boyd refused to sell; soldier seized bottle; woman drew a knife; soldier did the same; Wise Artillery interfered in behalf of woman, and Border Guards Artillery for soldier. It was a fierce conflict, and was only ended by the interference of general officers. Twenty or thirty were badly wounded."

Confederate Army Colonel John Pemberton was wounded in the Battle of Columbus, Georgia in April 1865. He became addicted to morphine during his recovery. He invented Coca-Cola while trying to create something that would counteract his morphine addiction.

From The Southern Gentleman on Face Book