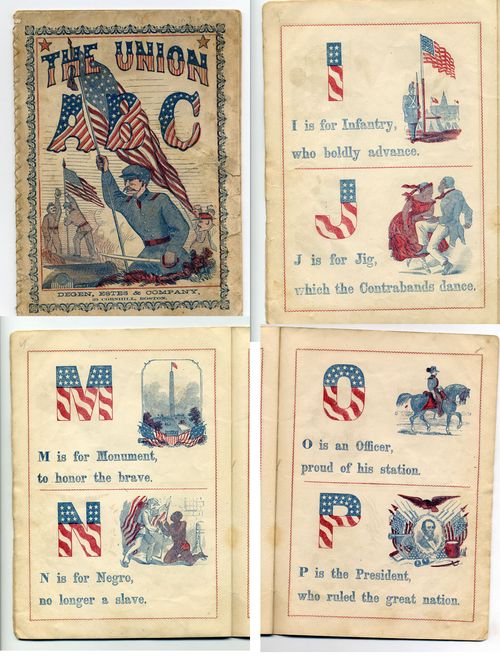 “The Union ABC”, published in Boston by Degen, Estes & Co. [n.y], 12 pp., bound in thread. This patriotic booklet, measuring a healthy 6 x 8 1/2”, is printed in red and blue and was meant to teach youngsters the alphabet and a history lesson, as well. Some of the entries include: H is for Hardtack you scarcely can gnaw, J is for Jig which the Contrabands dance, N is for Negro no longer a slave, P is the President who ruled the great nation, T is a traitor that was hung on a tree, and U is the Union our Soldiers did save. The back cover advertises Toy Books, Games (“Patriot Heroes: Or, Who’s Traitor.”), Union Reward Cards and the Chicken Little Series. Utterly charming; evocative of Civil War society. Cover has two edge tears internally repaired with period paper tape. Generally in excellent condition. (Est. $200-300)

From the collectibles site RailSplitter.com.

A copy of this book is in the Library of Congress.

There were 1,162 battles and skirmishes in Missouri during the Civil War, behind only Virginia and Tennessee. Virginia gets the press, and the movies.

Most historians relegate Missouri’s role as a footnote, a faraway place with a nasty internal guerrilla war that produced the likes of Jesse James. Historian James McPherson, one of the contemporary giants of Civil War studies, refers to Missouri as “peripheral to the principal military campaigns of the war.”

Louis S. Gerteis, a professor of history at the University of Missouri at St. Louis, respectfully disagrees. Gerteis established his bona fides in 2001 with publication of “Civil War St. Louis,” a clear and thorough account of the turmoil, both in arms and cultural division, that afflicted St. Louis throughout the four-year war.

This summer he has answered McPherson with “The Civil War in Missouri: A Military History,” a narrative of the clashes between conventional Union and Confederate armies in Missouri. Gerteis notes that the Federal Civil War Sites Advisory Commission placed 45 battles at the highest level of significance. Three of them are in Missouri.

Over half of the soldiers killed during the Civil War were never identified. This changed the American Psyche in many ways, Among the changes we owe to the Civil War are the creation of national cemeteries and the birth of a duty to identify dead soldiers and notify their next of kin.

A new film by Ric Burns, based on a The Republic of Suffering by  Drew Gilpin Faust will premier on PBS on September 18, 2012

Thomas B. Allen’s expertise in military history and strategy is combined with Roger MacBride Allen’s knowledge of technology to reveal a lesser-known yet fascinating side of the 16th president of the United States. Their authoritative narrative reveals Lincoln as our nation’s first hands-on Commander-in-Chief, whose appreciation for the power of technology plays a critical role in the North’s Civil War victory over the less developed South.

Readers meet Lincoln as he exchanges vital telegraph messages with his generals in the field; we witness his inspection of new ship models at the Navy Yard; we view the president target-shooting with the designer of a new kind of rifle; and we follow Lincoln, the man of action, as he leads a daring raid to recapture Norfolk, VA.

I felt his story should not remain untold.

A 110-year-old memoir is now revealing the life, courage and faith of one man during the Civil War.

Edited by his grandson, THM: A Memoir (published by WestBow Press) follows the captivating time period embedded in the life of influential Chattanooga pastor Thomas Hooke McCallie. Touching on what he knew of his ancestral immigration and his education, the detailed memoir provides insight into McCallie’s life in Chattanooga during the Civil War and his prominent role in the church, which was during the war years was the city’s only church and served as a temporary hospital after the Battle of Chickamauga.

“I felt his story should not remain untold,” says editor and grandson David McCallie.

Purchased from the O'Fallon, Illinois, Public Library for $1.00

Ramage can reasonably claim to have produced the first full-scale biography of legendary Confederate raider John Singleton Mosby. And a readable, comprehensive portrait of the 80-year life of a gifted, thoroughly combative man it certainly is. Before the war, Mosby shot a fellow student at the University of Virginia. During the war, he was an extraordinarily effective master of guerrilla tactics. Leading comparative handfuls of men, he did far more damage to the Union than the Union did to him. Only regular antiguerrilla measures were effective against him.

After the war, Mosby's adherence to the Republican party made him persona non grata in the South, and he had to spend the rest of his career as a diplomat and federal attorney. Ramage has researched thoroughly--including interviewing one of Mosby's surviving grandchildren--and written clearly, making the book accessible to a wide range of readers. Slight pro-Confederate and psychobiographical elements do not seriously weaken this valuable addition to Civil War literature. Roland Green --This text refers to the Hardcover edition. From Booklist

Find it on Amazon