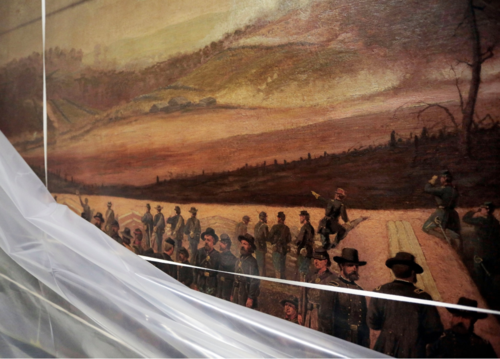 “The Battle of Resaca,” a large oil-on-canvas mural by the Civil War painter James Walker, had long been misidentified. Credit Nathaniel Brooks for The New York Times

SARATOGA SPRINGS, N.Y. — A historic Civil War mural that bounced, mislabeled, from museum to museum for several decades has emerged from storage, its identity reclaimed. But because of its size, its owners are still pondering where it can be displayed.

From 1887 to 1958, “The Battle of Resaca,” a 5-feet-by-12-feet oil-on-canvas mural by the Civil War artist James Walker, hung in an imposing brick and granite edifice on the Upper West Side.

“These murals were kind of spectacular at the time,” said Courtney Burns, director of the New York State Military Museum in Saratoga Springs. “They were meant for public viewing. They didn’t have movies back then. They were a source of entertainment. They had a lot of characters in them. Viewers would take their time to look at all the elements.”

And then “Resaca” lost its home. The building, the former armory of the 12th Regiment, was razed to make room for Lincoln Center for the Performing Arts. The mural was rolled up and sent to the Brooklyn Navy Yard for safekeeping, before heading to the United States Military Academy at West Point in the 1960s for a Civil War centennial celebration. Somehow, during its travels, the painting was incorrectly labeled a scene from Gettysburg. From West Point, it went into storage at the state Capitol in Albany, then at an armory in Albany and then at the nearby Watervliet Arsenal before landing in 2002 at the New York State Military Museum, which is run by the state’s Division of Military and Naval Affairs.

Read the full article at the New York Times

"ON DECORATION DAY" Political cartoon. A young boy and a young girl are in a graveyard with tombs of solidiers killed in the American Civil War. Caption: "You bet I’m goin’ to be a soldier, too, like my Uncle David, when I grow up."

N.C. Wyeth was born in Needham Massachusetts, His ancestor, Nicholas Wyeth, a stonemason, came to Massachusetts from England in 1645. Later ancestors were prominent participants in the French and Indian Wars, the Revolutionary War, the War of 1812, and the American Civil War, passing down rich oral histories and tradition to N.C. Wyeth and his family and providing subject matter for his art, which was deeply felt.

Newell Convers Wyeth (October 22, 1882 – October 19, 1945), known as N.C. Wyeth, was an American artist and illustrator. He was the pupil of artist Howard Pyle and became one of America’s greatest illustrators. During his lifetime, Wyeth created over 3,000 paintings and illustrated 112 books, 25 of them for the Scribner Classics, which is the work for which he is best known. The first of these, Treasure Island, was his masterpiece and the proceeds paid for his studio. Wyeth was a realist painter just as the camera and photography began to compete with his craft. Sometimes seen as melodramatic, his illustrations were designed to be understood quickly. Wyeth, who was both a painter and an illustrator, understood the difference, and said in 1908, “Painting and illustration cannot be mixed—one cannot merge from one into the other."-Wiki

Two-Fisted Tales was a bimonthly, anthology war comic published by EC Comics in the early 1950s. The title originated in 1950 when Harvey Kurtzman suggested to William Gaines that they publish an adventure comic. Kurtzman became the editor of Two-Fisted Tales, and with the advent of the Korean War, he soon narrowed the focus to war stories.

A series of special issues dedicated to the Civil War included issues 31 and 35 of Two-Fisted Tales and issue 9 of Frontline Combat. Although originally planned to be seven issues in total, the series was never completed.

Thanks to The Sons of Confederate Veterans Face book page.

Forever stamps issued for the sesquicentennial

VIENNA,Va., March 7, 2012 — The first stamps of the four year Civil War sesquicentennial have been unveiled by Post Office officials in Charleston, S.C.  Stamps will be issued annually in commemoration of the 150-year anniversary of the Civil War, which raged from 1861–1865, beginning when the opening shots were fired on Fort Sumter in Charleston Harbor.

The site of the new stamps is within earshot of the place where the attack took place, having the honor of being the first stamp. Its companion stamp shows the fighting at the Battle of First Manassas or Bull Run as it was called in the North. The accompanying description of the battle fails to state that the Southern troops won the battle, saying only that while the Northern Army had hoped to “crush the rebels,” instead they witnessed “fierce resistance from Southern troops and a preview of the long war to come.” Translation: the South won.

The stamps will be issued on a two-sided sheet, six of each design on the front, and a description of what they portray on the reverse. It is anticipated that a large number of the stamps will not be used for postage, but will become collectors’ items.

Read more at the Washington Times

The first Christmas of the Civil War was not very merry, on either side

Thomas Nast immortalized Santa Claus with an illustration for the January 3, 1863 issue of Harper's Weekly The first Santa Claus appeared as a small part of a large illustration titled "A Christmas Furlough" in which Nast set aside his regular news and political coverage to do a Santa Claus drawing. This Santa was a man dressed up handing out gifts to Union soldiers. Copyright note: the creator of this work died in 1902.

When the fathers and older brothers marched off to war in the spring of 1861, most left behind families filled with patriotic pride. But as Christmas drew near, their families were filled with sadness at the thought of the holiday without them.

At least they didn’t have to worry about losing their loved ones in battle. Not much fighting went on during the winter, so the armies stayed in camp, drilling and trying to keep warm. Mothers and children packed Christmas boxes to send them. Apples, baked goods and other treats to share — maybe even a ham or a pound of butter! — and knit socks and gloves.

On Christmas Day, most children went to church with their mothers and received small presents. This early in the war, there was enough food for a special Christmas dinner, too. People sang carols and tried to be cheerful. But in army camps on both sides, it was an ordinary winter day: drilling, writing letters and bringing in firewood. In the evening, though, the cooks prepared a special meal, and often there was singing as well as races and games.

This first wartime Christmas was not a joyous one, but those that followed it would be much worse.

One of the most stunning items on display at the Missouri History Museum's "Civil War in Missouri"  exhibit is George Caleb Bingham's  painting of General Order No. 11. I General Thomas Ewing is seated on a horse watching the Red Legs enforce the order. I was struck by Bingham's use of light and shadow, a near photographic sense of depth of field, and the use of detail to bring the drama to life.

General Order No. 11 is the title of a Union Army directive issued during the Civil War on 25 August 1863, forcing the evacuation of rural areas in four counties in western Missouri. The order, issued by Union General Thomas Ewing, affected all rural residents regardless of their allegiance. Those who could prove their loyalty to the Union were permitted to stay in the affected area, but had to leave their farms and move to communities near military outposts. Those who could not do so had to vacate the area altogether.

While intended to deprive pro-Confederate guerrillas of material support from the rural countryside, the severity of the Order's provisions and the sometimes savage nature of its enforcement alienated vast numbers of civilians, and ultimately led to conditions in which the Rebel bushwhackers actually found themselves with even greater access to supplies than before. It was repealed in January of 1864, as a new General took command of Union forces in the region.