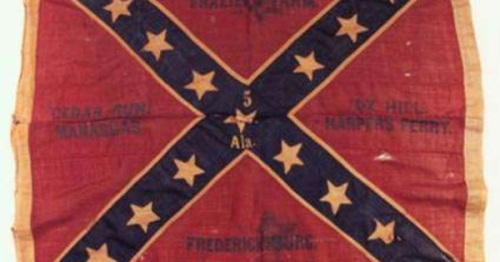 The Fifth Infantry was organized at Montgomery, May 5, 1861, and at once moved to Pensacola. A few days after, it proceeded to Virginia, and took post near Manassas Junction in the brigade of Gen. Ewell. It was in the skirmish at Farr's X Roads, and was on the field but not engaged at the first Manassas. It remained in the vicinity of Manassas during the fall and winter, and Gen. Rodes became the brigade commander in October - the Sixth and Twelfth of Alabama, and the Twelfth of Mississippi, being the other regiments of the brigade. Moving with the army to Yorktown in March 1862, it there re-enlisted and re-organized. It was under fire at Yorktown, and was on the field at Williamsburg. At Seven Pines the regiment received its baptism of blood, losing 27 killed and 128 wounded. The regiment was hotly engaged at Cold Harbor and Malvern Hill, losing 15 killed and 58 wounded. It was not at the second Manassas battle, but moved into Maryland, and shared in the stubborn conflicts at Boonsboro and Sharpsburg, losing 11 killed and 39 wounded out of the remnant present for duty. It was in line of battle on the crest, and saw Burnside's bloody repulse at Fredericksburg; and at Chancellorsville it was in the invincible line under Rodes that swept everything before it; reaping its brightest renown, and losing heavily. It moved into Maryland and Pennsylvania on the Gettysburg campaign, and its loss was very severe in that battle. Having wintered at Orange C.H., the Fifth, now reduced to a mere skeleton, participated in the battles of the Wilderness and Spottsylvania, and without severe loss. It took part in the subsequent operations as the lines began to be drawn around Petersburg, losing slightly at the second Cold Harbor. It went with Early into the Valley and across the Potomac, taking part in numerous engagements with the foe, and losing severely at Winchester. It soon after took its place in the memorable trenches of Petersburg, and wintered there. Only 25 or 30 men were around its colors when they were surrendered at Appomattox, under Capt. Riley. Of 1719 names on its rolls, nearly 300 perished in battle, 240 others died in the service, and 507 were discharged or transferred.

Captains, and Counties from Which the Companies Came.

Tuskaloosa - Wm H. Fowler. (Company transferred to artillery at the close of the first year's service).