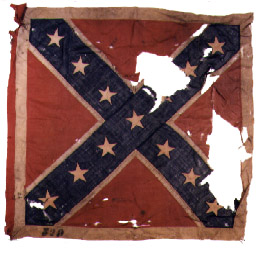 This regiment was organized in May 1862, and soon after proceeded to Chattanooga. It operated in middle Tennessee some months, then joined the army of Tennessee soon after its return from the Kentucky campaign.

It was initiated into tho harsh realities of war when "stormed at with shot and shell," as part of Hanson's devoted brigade, at Murfreesboro; and on that fatal field left its brigadier and 198 of its dead and wounded. The regiment then remained at Tullahoma till ordered to Mississippi with the other portions of Breckinridge's division.

It was engaged in the operations for the relief of Vicksburg, and in the trenches of Jackson. Having rejoined the Army of Tennessee, the Forty-first was in the forward movement at Chicamauga, and in the fierce struggle over the enemy's fortified position, left its brigade commander (Gen. Helm of Kentucky) and 189 men on the bloody field.

The regiment was shortly after transferred to the brigade of Gen. Gracie of Mobile--Forty-third, Fifty-ninth, and Sixtieth Alabama, and Stallworth's battalion. As part of Longstreet's corps, the Forty-first participated in the bloody struggles and severe privations of the winter campaign in east Tennessee, sustaining much loss.

The regiment reached Virginia in April 1864, and was engaged in the battle of Drewry's Bluff and Dutch Gap. It was then in the protracted siege at Petersburg, and in the bloody battles around that city.

The regiment was also very hotly engaged at Hatcher's Run, and in the fighting on the retreat to Appomattox; and was there fighting under the matchless Lieut. Gen. Gordon, when the flag of truce appeared. About 270 of its number were there present for duty, under Col. Stansel. Of 1454 names on its rolls, about 130 were killed, about 370 died of disease, and 135 were transferred or discharged.

Captains, and Counties from Which the Companies Came.

History of the 41st's flag