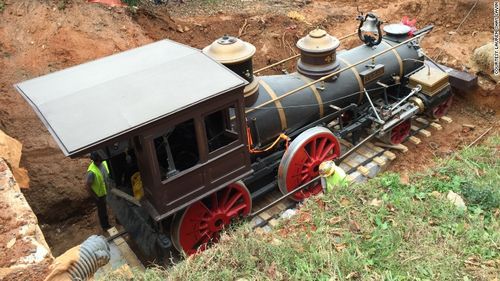 The Texas, made famous in a 1950s Disney movie, was one of the players in the war's Great Locomotive Chase in April 1862. Its crew, running the locomotive backward, caught up with Union raiders who tried to destroy track between Big Shanty (now Kennesaw) and Chattanooga, Tennessee.

The raiders achieved little success, and eight of the nearly two dozen captured participants, disguised as civilians, were later hanged in Atlanta as spies.

"We want to show it as the hard-working engine that it was, not just as one of the engines in the Great Locomotive Chase," Gordon Jones, the history center's senior military historian, said in a statement.