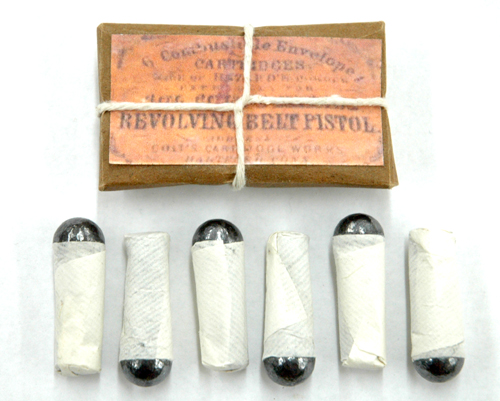 Before the 1870’s most revolvers operated with what was called the “cap and ball” system.  This meant that each chamber was loaded with loose powder, a bullet, and a percussion cap was placed on the nipple of each chamber.  When the hammer struck the percussion cap, it would drive a spark into the chamber which discharged the chamber.

In 1855 the gun designer Rollin White invented the bored through cylinder, which could be loaded with rimfire metallic cartridges.  The use of such cartridges greatly sped up loading time, however only the patent holder (Smith and Wesson) could produce such revolvers without paying hefty royalties.  As an alternative to the metallic cartridge, Colt invented the combustible paper revolver cartridge.  The cartridge featured a bullet and charge of powder placed within a seamless paper casing. The bullet could be both round ball or conical. The cartridge was inserted into a chamber front first.  Typically the cartridge was tapered on the end for easier loading.  The cartridge was then rammed into place with the loading lever.  The paper was impregnated with potassium nitrate making it highly combustible, combustible enough that a spark from a percussion cap to discharge the cartridge, and discharge it thoroughly enough that it wouldn’t leave remnants of paper in the chamber.

Paper revolver cartridges were manufactured by a number of companies, with their hayday occurring during the American Civil War.  By 1870, two things led to the end of the paper cartridge,  the first being the expiration of Rolling Whites patent, the second being the invention of the metallic centerfire cartridge.  Today black powder enthusiasts typically make their own paper revolver cartridges.

From peashooter85 on Tumblr