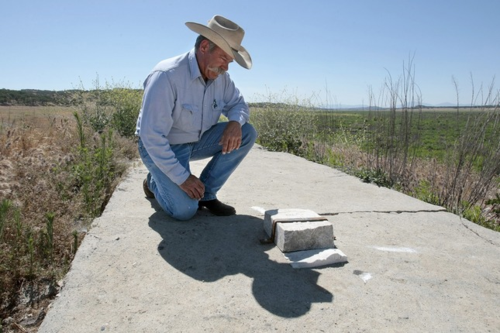 BRADLEY -- Joseph Botts Jr. stepped out of his pickup truck into a scrubby, sunbaked field of salt grass and mustard weed and bent over a granite slab bearing a worn inscription: "Corp'l John McBride."

The retired park ranger has known about the Civil War veteran's gravesite for most of his life. But for much of the past half-century, McBride's remains and the tiny ghost town where he met his fate lay at the bottom of a reservoir, submerged due to a thirsty state's need to corral every drop that flows through its parched ravines.

Now California's historic drought has shrunk Monterey County's Lake San Antonio to a fraction of its former size, exposing McBride's headstone to sunlight for the first time in decades. The re-emergence of the 128-year-old gravesite has inspired Botts, one of the few locals who even remember it exists, to ensure the veteran's burial place and his memory are preserved.

"He was probably an unemployed soldier looking for a quiet way of life in a peaceful valley," Botts said recently while showing off the site.