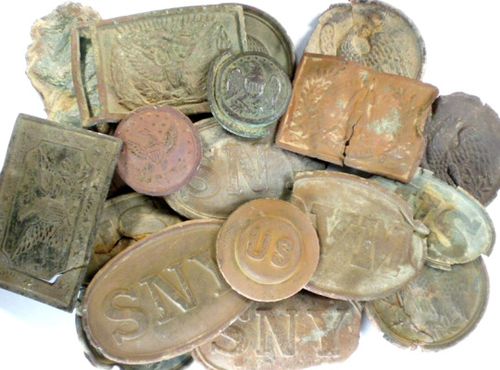 How do you know if it’s real, fake, or just a reproduction? A glimpse inside the complex world of Civil War belt buckles

Some fakes are easily spotted: the font relief is razor-sharp and obviously freshly struck off a modern die, or the hooks on the back are made of modern steel. But some are devilishly difficult to analyze. Confederate buckles tend to be trickier than U.S. buckles to certify, as the original Confederate buckle-makers were usually amateurs, and their lackadaisical craftsmanship is easy to replicate. This is a difficult field. In extreme cases, an expert may think that a buckle is real for a dozen reasons, yet the strongest pronouncement he feels certain of is that he just can’t prove it’s not fake.

The US Oval is the most common Civil War belt buckle on the market, and indeed was the most common buckle on the battlefield during the Civil War. In the North, the Union had the industrial resources and was able to die-stamp as many as a million of these buckles. Consequently, the US Oval is not terribly valuable — some fetch about $300 to $350 — though of course that doesn’t stop fakers from producing their own versions.