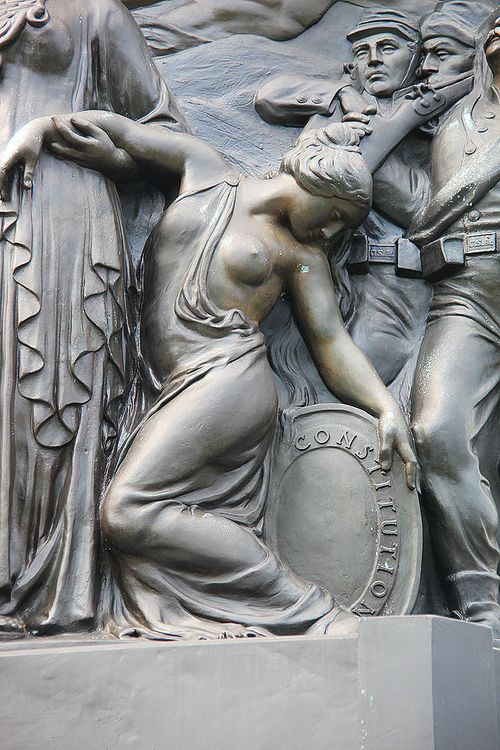 The fallen figure of a woman, also representing “The South”, leans on a shield emblazoned with the words “The Constitution” as a symbol of what the UDC believed the South fought for.

A figure representing “The South” stumbles while clutching a shield representing the Constitution of the United States on the south face of the Confederate Monument at Arlington National Cemtery in Arlington, Virginia, in the United States. Mineva, goddess of war, supports her. American historians agree that many of the civic wounds created by the American Civil War were healed by the feelings of common cause generated during Spanish-American War. In June 1900, the U.S. Congress passed legislation setting aside Section 16 of the cemetery for the burial of Confederate States of America war dead. Many Confederate dead were already buried at the cemetery, and were memorialized by the Civil War Unknowns Monument. But the new area of the cemetery would allow for individual burial of those whose identities were known.

By December 1901, 482 Confederate remains were disinterred at the cemeteries at Alexandria, Virginia; the Soldiers’ Home in Washington, D.C.; and portions of Arlington National Cemetery and reinterred in concentric circles in Section 16. Their headstones were given a pointed top, to indicate that they were Confederate graves.

Shortly thereafter, the United Daughters of the Confederacy asked that a memorial to the Confederate dead be erected in Section 16. Secretary of War William Howard Taft granted the request on March 4, 1906. Confederate veteran and nationally-known sculptor Moses Ezekiel was commissioned to design and sculpt the monument. It was cast and manufactured by Aktien-Gesellschaft Gladenbeck of Berlin, Germany.