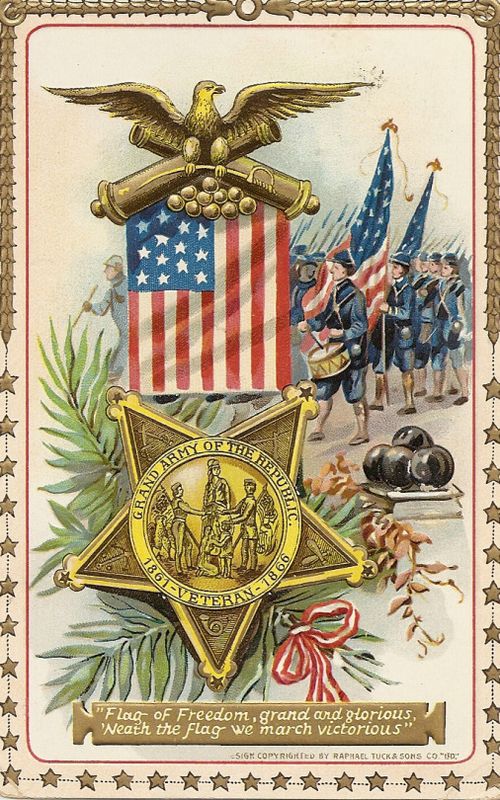 Today there are countless fraternities and organizations, both private sponsored and government run, for veterans and their families.  But before the Civil War there really were no national level organizations for veterans.  In 1866 the Grand Army of the Republic (GAR) was found by Dr. Benjamin F. Stephenson, who was an army surgeon during the war.  Originally the GAR was founded as a fraternity for Union Civil War veterans.  However as the organization grew it became more involved in politics.  Soon the GAR became a veterans advocacy group, lobbying for veterans benefits, equal pensions for black Civil War veterans, and sponsoring candidates for political office.

The GAR was a national organization, but divided into state departments and local posts.  Members typically wore military style uniforms while the organization operated on a quasi military chain of command (post commander, commander-in-chief) Today most veterans organizations, such as the Veterans of Foreign Wars (VFW) and American Legion, use the exact same model.  Annually the GAR would hold a National Encampment, as well a state and local reunions. At its height in 1890, the GAR was composed of over 490,000 members. This included one woman, Sarah Emma Edmonds, who had fought in the war disguised as a man.  In response to the popularity of the GAR, Confederate veterans also formed their own group, the Unite Confederate Veterans.

Although the GAR disbanded over 60 years ago, its legacy still lives on.  One idea created by the GAR was to mark veterans graves with a special bronze marker.  Union Civil War veterans graves are marked with the symbol of the GAR (a five pointed star).  Today the tradition of marking veterans graves from the American Revolution to Iraq and Afghanistan serves as a final legacy of the GAR.