Civil War Family
Home About this blog Battle map Family map
Blood and Glory: The Civil War in Color The March to War
The Grand Army of the Republic: founded April 6, 1866 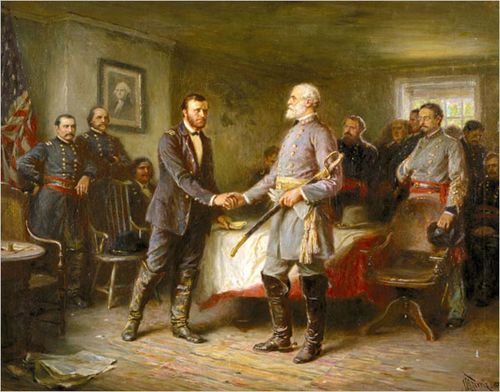 Confederate Gen. Robert E. Lee surrendered this week 150 years ago in the Civil War, after four years of bloodshed that had claimed hundreds of thousands of lives. After days of fighting and fleeing had left his forces haggard, hungry and surrounded, Lee surrendered his Army of Northern Virginia on April 9, 1865, to the Union's Ulysses S. Grant at the McLean House at Appomattox Court House. Grant allowed for the parole of the Confederate officers and enlisted men but said all weapons and war equipment would be surrendered. The end of Lee's fighting force came after federal troops had relentlessly pursued and pummeled Lee's troops westward across the Virginia countryside. The Associated Press reported the details of the surrender, noting Lee had crossed the Appomattox River and burned bridges, seeking a position away from the river. But Union forces "attacked them vigorously" in the hours before the end, convincing Lee the fight was over. AP cited accounts as saying "the road for miles was strewn with broken down wagons, caissons, and baggage of all kinds, presenting a scene seldom witnessed on the part of Lee's army." AP reported that "the rank and file of Lee's army are said to be well satisfied to give up the struggle, believing that they have no hope of success." And AP added that the formal surrender came later at the country home, leaving the Confederates forces 'at liberty to proceed to their homes or elsewhere, as they chose."

From the Associated Press