Civil War Family
Home About this blog Battle map Family map
The Grand Army of the Republic: founded April 6, 1866
The end of the war: Associated Press

There is no country 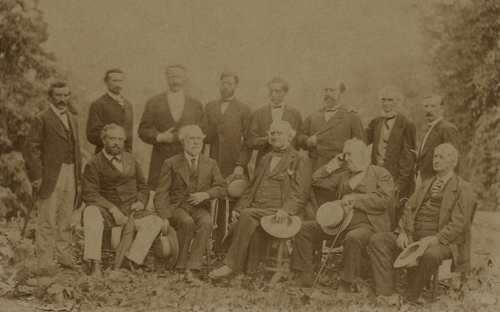 Wise, who helmed a division in Lee’s army, implored his commander: “my poor brave men are lying on yonder hill more dead than alive. For more than a week they have been fighting day and night, without food, and, by God sir, they shall not move another step until somebody gives them something to eat.”

To this, Lee assured him that they would soon have something to eat. When Wise was more or less pacified, Lee asked him for his thoughts on their situation.

“Situation?” spat Wise, “There is no situation. Nothing remains, General Lee, but to put your poor men on your poor mules and send them home in time for the spring ploughing. This army is hopelessly whipped, and is fast becoming demoralized. These men have already endured more than I believed flesh and blood could stand, and I say to you, sir, emphatically, that to prolong the struggle is murder, and the blood of ‘every man who is killed from this time forth is on your head, General Lee.”

“Oh, General,” Lee replied with anger, “do not talk so wildly! My burdens are heavy enough! What would the country think of me, if I did what you suggest?”

“Country be damned,” snapped Wise. “There is no country. There has been no country, General, for a year or more. You are the country to these men. They have fought for you. They have shivered through a long winter for you. Without pay or clothes or care of any sort, their devotion to you and faith in you have been the only things that have held this army together. If you demand the sacrifice, there are still left thousands of us who will die for you. You know the game is desperate beyond redemption, and that, if you so announce, no man, or government, or people, will gainsay your decision. That is why I repeat that the blood of any man killed hereafter is on your head.”

Lee, by the word of Wise’s son, made no reply.