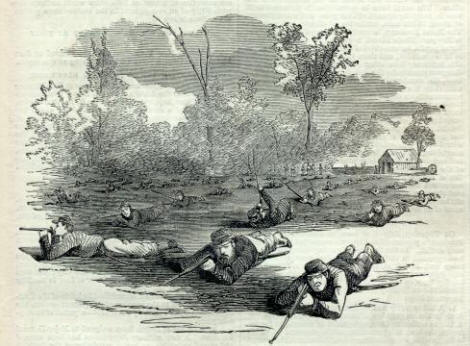 "Early this morning Sheridan attacked vigorously, and for some time a brisk engagement was carried on. About nine a.m. a flag-of-truce appeared in front of his line and he was informed that hostilities had been suspended in order to arrange terms of surrender. This was caused by an agreement ... General Sheridan's Adjutant ... was allowed to come through the rebel column to communicate ... that he knew of no such arrangement, and that he was about to move forward in accordance with his previous intentions. Gen'l Lee, however, sent another message, desiring to have an interview with General Grant, to arrange the terms of surrender, and General Meade was thus obliged to grant a two hours armistice in order to communicate with Gen'l Grant ... The two hours expired without any result and the second corps ... had commenced to advance, when word came to halt, General Grant consenting to see General Lee, and discuss the matter ... greatest excitement prevailed throughout our lines, cheer upon cheer rending the air ... "