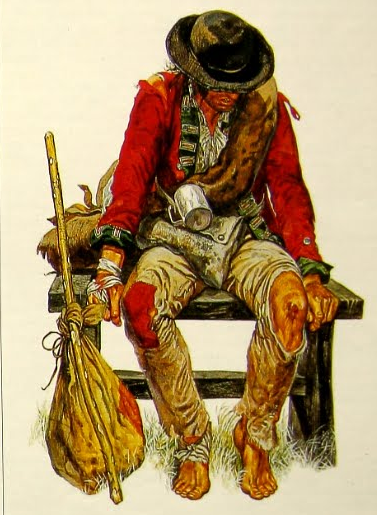 Like the other British soldiers serving in the South, Tommy is a far cry from the public ideal of a immaculately dressed, wig-wearing redcoat. His three-sided cocked hat has been let down to form a broad brim to keep the sun off his brow and neck. Most of his coat’s buttons have been lost or sold, and the lace has been torn off, frayed or is hanging loose. The wool coat itself is also worn thin and badly faded. He cut off its heavy, warm coat tails not long after the regiment arrived in Charlestown in 1780. His trousers and gaiters are gone, replaced by loose “Indian trousers” that have been patched almost to obscurity. His shoes have long since worn out - he intends to replace them with those belonging to the next rebel corpse he comes across, whether they fit him or not. His Army-issue tin canteen took a musket ball at Camden, and he has replaced it with a cup bought from the regimental sutler. His pack is likewise gone, lost when fording the rushing Catawba river - his bedroll and a sack now suffice in its place.

He has nearly died twice, once to dysentery and once to yellow fever. Disease has killed more of his brothers in arms than the rebels. He is lean, tanned, and mostly occupied by feeding himself and his comrades, cleaning his Short Land Pattern musket and bayonet, and marching. When battle is joined he fights for the men around him, for his Regiment and for his King. Initially he felt little animosity towards the rebels. He hates them now. The average America’s living standard is much better than their British counterparts. Like most Britons visiting America, he believes the colonials are privileged, lazy and, above all, ungrateful.

Above all else, he is a professional soldier in an army that is as dynamic, as determined and as well-led as it ever has been and ever will be. In young men like Tommy, the colonials have found an enemy who will loom large for eternity in their national history, and with good reason.