Civil War Family
Home About this blog Battle map Family map
This week in the Civil War for March 1, 1865
POW's journal from Andersonville

Gear used by a soldier at Waterloo. 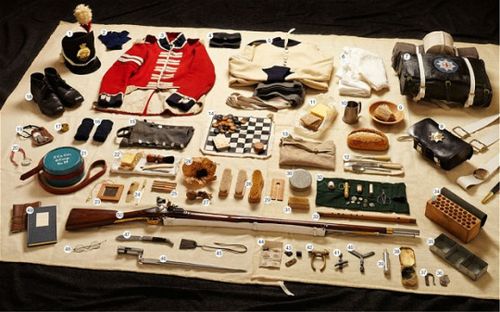 A different war. A different contenant. A soldier's gear remains the same.

1.) 1812 pattern Belgic Shako as worn by a centre company soldier of the Coldstream Guards during the Battle of Waterloo in 1815. It has white worsted woollen cap cords and tassels, a brass cap plate bearing a Coldstream star in the centre, a black leather cockade worn on the left hand side red and white feathered plume to indicate that the wearer is from a centre company. If the soldier was from the Grenadier Company he would wear a white plume and from the Light Company a Green plume

3.) Soldiers red short coat bearing the rank of Corporal, it was lined with course linen and had Royal Blue facings, white worsted lace pewter buttons in two’s as is the custom for the Coldstream Guards.

4.) Black linen stock and leather stock worn around the neck

5.) White waistcoat jacket, which had thinner sleeves than the body and would be worn under the red short coat or on its own for fatigue or off duty wear around the camp.

6.) Linen shirts and under garments

7.) Black painted canvas knapsack which contained all the soldiers personal equipment and possessions when on campaign, it bears the Star of the Garter with the words Coldstream Guards in the centre scroll. On the top is a rolled Greatcoat and mess tins held in place by pipeclayed buff leather straps

8.) Leather cartridge box which contained 60 rounds of pre-packed ball cartridge ammunition, it has a Coldstream Guards star fitted to it and was carried on the right hip by a pipeclayed buff leather shoulder belt. Also visible is the bayonet scabbard and crossbelt worn on the left side

9.) Wooden bowl containing a day’s ration of salted beef, rations would be carried in the linen haversack

11.) Hard tack biscuits and cheese, carried in the linen haversack

12.) Knife, fork and spoon kept in a linen bag and a day’s ration of bread

14.) Soldier’s games, draughts and a board made from a piece of tent canvas, a pack of cards and a wooden yo-yo

18.) Straight lasted shoes. The leather was rough side out and as they were straight lasted there was no right or left shoe; soldiers were expected to swop them around to prevent excessive wear on one side

20.) Pocket watch on a length of woven binding

21.) Wooden water canteen on a leather strap worn on the left hip

29.) Wooden button stick, used to polish buttons and prevent clothing being stained in the process

30.) Tin containing finely ground brick dust, which was mixed with olive oil and used as a metal polish

33.) Fife, a small, high-pitched instrument, similar to the piccolo

40.) Gun tool and worm used to strip and reassemble the Brown Bess musket for cleaning and repair, it was a simple device made up of two screwdriver heads and pointed needle used to push out the metal pins holding the barrel to the stock, screwed onto the pin is a worm which could be screwed on to the ramrod and was used to help remove cleaning cloth or unfired charges from the barrel

41.) Feather spring clamp, used to remove the frizzen from the lock

42.) Ramrod puller, used to remove a ramrod stuck in the barrel or stock

43.) Musket flint with a scrap of notched leather and a piece of notched lead either of which would be placed around the flint and then helped secure the flint in the hammer

45.) Leather lock stall, used to place over the frizzen to protect it and prevent accidental sparking that could fire the weapon

46.) 17” triangular socket bayonet which fitted onto the musket, the same fitting method was subsequently used for the modern electric light

50.) Brown Bess musket was in service from 1722 to 1838 - some were even shipped to the Crimea in 1854. It weighed 4.8kg and was made up of three component parts the lock, stock and barrel. It had an effective range of 100 meters but was capable of firing to 250 meters. It fired a .75 musket ball made of lead, which was contained as part of a paper tube made from Cartridge Grade paper which contained gunpowder. The soldier would remove the cartridge from the cartridge box, bite off the end to release the powder, pour a small amount into the pan and the rest down the barrel. The now empty cartridge still attached to the musket ball would then be placed into the barrel as wadding and the ramrod used to ram it down. The musket would be cocked and was then ready to fire. When the trigger was pulled the hammer containing the flint would strike the frizzen, causing sparks to ignite the gunpowder in the pan and pass through the touch hole to ignite the main charge and fire the musket ball. A well drilled soldier was capable of firing 4 shots a minute

4 shots a minute was extremely fast. 3 is far more likely. The gear shown here wouldn’t be too terribly different for a soldier in the Seven Years War or the Revolutionary War.