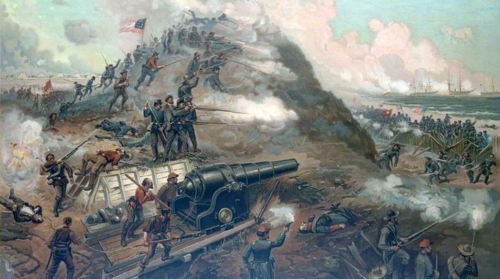 The Union army, in its latest blow to the Confederacy, captured Wilmington, North Carolina, this week 150 years ago in the Civil War. The federal victory meant President Abraham Lincoln's troops had shut down the last major East Coast port of the Confederacy — and a critical route for supplies to the Southern army. The fighting that led to the fall of Wilmington began in mid-February of 1865 as Union forces confronted Confederates defending Fort Fisher. Union gunboats pounded the fort and Confederates ultimately had to pull out the night of Feb. 18, 1865, and early the following day as Union forces marched toward the rear of the fort. Between Feb. 21 and 22 of that year, federal forces put up relentless pressure as the fighting forced the Confederacy to remove its forces and retreat from Wilmington.