Civil War Family
Home About this blog Battle map Family map
The Ponder House, Atlanta, 1865
This week in the Civil War for March 1, 1865 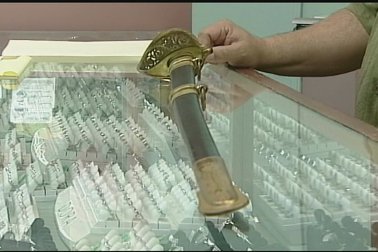 HONOLULU —The Pacific Diamond and Swiss Watch Exchange is an unlikely place to find a civil war sword, but shop owner Ted Gonzalez had one. He bought it in 2012 in from an estate dealer.

"I thought it was unusual just because I've never bought one before I decided to buy it and decided to keep it," said Gonzalez.
He didn't know what to do with it until client Paul Perrone noticed the name Lt. Edwin Coe engraved on the weapon. The history buff then found a photo of Lt. Coe.
Coe was a union solder from Worcester, Massachusetts. He served in the 57th Massachusetts Regiment and died on June 16, 1864, leading a charge during the Battle of Petersburg.
Documents show he was only 19.
Full story here: http://www.kitv.com/news/civil-war-sword-returned-to-soldier-killed-in-battle/31512854