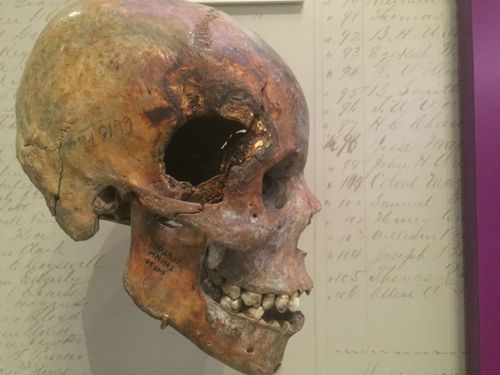 "This skull belonged to a soldier of the 54th Massachusetts Volunteers, an African-American unit that took part in a July 1863 assault on Fort Wagner in Charleston Harbor. The regiment sustained 272 killed, wounded, and missing during the attack.

By examining the skull, researchers determined how this soldier died. The size of the wound and the remains of the projectile indicate that he was killed by an iron canister ball from one of the fort’s two 12-pound field howitzers. The ball entered behind his left ear and traveled upwards through the lower part of the brain.”

(Photo and Caption taken from display at the National Museum of Health and Medicine, Washington DC)