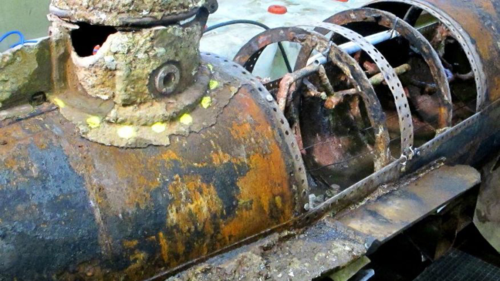 The Hunley was discovered off the South Carolina coast in 1995, raised in 2000 and brought to a conservation lab in North Charleston.

It was covered with a hardened gunk of encrusted sand, sediment and rust that scientists call concretion.

Last May, it was finally ready to be bathed in a solution of sodium hydroxide to loosen the encrustation. Then in August, scientists using small air-powered chisels and dental tools began the laborious job of removing the coating.

Now about 70 percent of the outside hull has been revealed. The last remaining areas have been described as “forensic hot spots.”

Friends of the Hunley, a group dedicated to conserving and eventually exhibiting the vessel, says that the remaining parts of the vessel’s exterior should be revealed during the coming weeks. The team of conservators from Clemson University has already made some interesting discoveries, such as an area of the hull where the metal surface is stamped with the letters “C N.” Experts are investigating the meaning of the stamp, which is thought to represent the foundry where the Hunley’s iron was forged.

Mardikian said the exposed hull indeed has revealed some things that may help solve the mystery of the sinking.

"I would have to lie to you if I said we had not, but it's too early to talk about it yet," he said. "We have a submarine that is encrypted. It's like an Enigma machine."

He said the clues will be studied closely as scientists try to piece together what happened to the 40-foot submarine that night in 1864.

The Hunley had a 16-foot spar tipped with a charge of black powder that was exploded, sinking the Housatonic. After close examination of the spar two years ago, scientists speculated the crew was knocked unconscious by the shock wave of the explosion.

When the Hunley was first raised, scientists speculated the crew may have run out of air before they could crank back to the coast. Scientists have also discussed the possibility the sub may have been sunk by an open hatch.

After the Hunley was raised, the sand and the silt and the remains of the crew in the interior were removed.

In April 2004, thousands of men in Confederate gray and Union blue walked in a procession with the crew's coffins four miles from Charleston's waterfront Battery to Magnolia Cemetery in what has been called the last Confederate funeral.

Fascinating Civil War artifacts are still being unearthed. A cleanup of the Congaree River in Columbia, SC, for example, may lead to the recovery of Confederate munitions seized and then dumped by Gen. William T. Sherman's Union army.

The Associated Press contributed to this report.