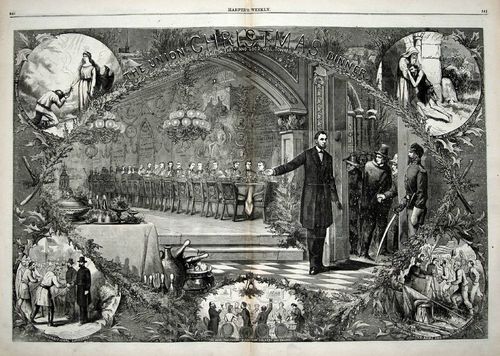 150 years ago, our Nation had witnessed nearly 4 years of human sacrifice and carnage in our American Civil War. Both sides had grown tired of killing each other. Over one-half million American lives had been sacrificed from both sides, North and South, but the end of war was finally in sight.

Nationally-known artist Thomas Nast had been commissioned to create this drawing for the Christmas 1864 issue of Harper’s Weekly magazine. It was entitled, “The Union Christmas Dinner … Peace on Earth and Good Will Toward Men”. It was an attempt to reach out and extend the olive branch of peace, and bring the nation back together during a most opportune time … this Holy time, when all men should humbly put down their differences, and come together in honor of their Savior.

In the upper left of the drawing, Lady Victory extends the olive branch to a humbled soldier, with a Church visible in the background.

In the lower left, General Lee surrenders to General Grant … a providential image, since Nast had drawn this within six months before the actual surrender.

The upper right corner shows the return of the prodigal son.

The lower right corner shows unarmed Federal and Confederate soldiers running to embrace one another, with the American flag in the middle, symbolizing the re-union of the country.

The picture in the lower middle is entitled, “The Home Toast, God bless our Soldiers and Sailors” and seems to be representative of families, from both North and South.

The main body of the drawing is most touching. One sees empty chairs at the dinner table, and each chair has the initials of the Southern States inscribed on them. President Lincoln opens the door to the Christmas Dinner, welcoming and inviting Confederate soldiers to enter and join in, while fellow Americans await them at the table. It’s a very moving image, and even more touching to know that Lincoln wished for complete pardon and amnesty to all Southern Americans, and that Grant and President Johnson carried out Lincoln’s wishes. “Peace on Earth, and Good Will Toward Men”!

The Missouri Civil War Museum wishes a very Merry Christmas, Happy Hannukah, and “peace and good will” to all!