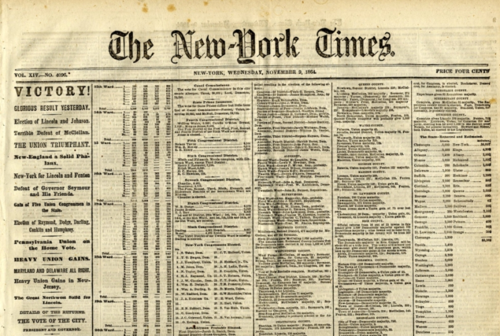 Union states patiently awaited final ratification this week of President Abraham Lincoln's re-election 150 years ago in the Civil War. The New York Hearld, a day after the voting concluded in November 1864, trumpeted: "The Result of the Great National Contest. ABRAHAM LINCOLN RE-ELECTED PRESIDENT." The newspaper reported voting proceeded calmly despite rain in many Union states and that based on early vote tallies, Lincoln's re-election was at hand. The Associated Press reported Lincoln was serenaded by well-wishers from Pennsylvania a day after the vote, delivering a speech from a window stating he had worked "for the best interests of the country and the world, not only for the present, but for all future ages." He added that he would abide by the outcome once it had been duly ratified.