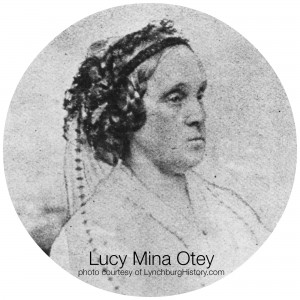 Lucy Mina Otey would eventually lose three sons and a son-in-law in the Civil War. At age 60 and a widow, she organized a group of ladies in Lynchburg, Virginia to make bandages and uniforms. With the expansion of the war, women became hospital nurses and matrons.

Due to the opposition of women in hospitals by the local military chief, Dr. William Otway Owen, Mrs. Otey was turned away at a hospital with official orders, "No more women, no more flies." Dr. Owen believed that women had no place in hospitals and should stay home and sew uniforms. He would not allow them to have anything to do with patients. So, Mrs. Otey traveled to Richmond and petitioned President Jefferson Davis to allow her to set up an Independent Ladies' Relief Hospital with beds for 100 patients. The Ladies' Relief Hospital was set up in the old Union Hotel and staffed by the organization of 500 women, with Mrs. Captain Otey as its president. Despite receiving the worst casualties, Mrs. Otey's hospital had one of the lowest mortality rates among military hospitals.

During the first difficult winter, Mrs. Otey requested that women who staffed the hospital be accorded the ability to purchase supplies from the commissary as officers. Her request was denied.
From Civil War Talk