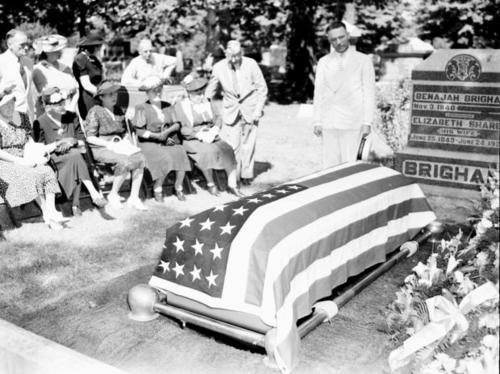 On Aug. 7, 1940, the Rev. Loyal M. Thompson of First Methodist Church, Bloomington, offered a prayer over the casket of Benajah Brigham, Bloomington’s last Civil War soldier, who had passed away two days earlier.

Joseph W. Fifer and Benajah Brigham, believed to be the last two living Civil War veterans in Bloomington, died in 1938 and 1940, respectively. Coincidentally, both men served together in Company C of the 33rd Illinois Infantry Regiment.

In March 1936, the closing of Bloomington-Normal’s last Grand Army of the Republic post signaled the imminent end of the Civil War generation. The GAR was a fraternal organization of Union veterans that wielded impressive political power in the decades after the war.

Ninety-five-year-old Bloomington resident Joseph Fifer, the local GAR post commander and former Illinois governor, was the only veteran able to attend the rather bittersweet ceremony. The three other remaining Bloomington-Normal veterans, including Benajah Brigham, were unable to be there.

Seventy-three years earlier, during the spring and summer of 1863, Fifer and Brigham were part of Ulysses S. Grant’s epic campaign to take Vicksburg, Miss., the last Confederate stronghold on the Mississippi River.

Read the full article at the Pantograph.com