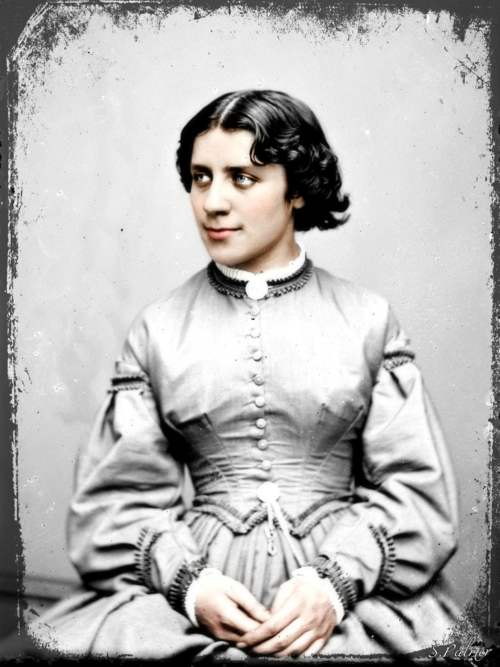 One newsman wrote that she “could hold her audience spellbound for as much as two hours.  She gave the impression of being under some magical control.” Averaging a speech every other day, she earned as much as twenty thousand dollars annually – an amazing amount for that era.

In 1861 she held a position at the U.S. mint in Philadelphia, but she was fired for publicly accusing General George B. McClellan of treason in the loss of the Battle of Ball’s Bluff. Thereafter she devoted herself to the speaker’s platform.

She addressed venereal disease in a lecture titled “Between Us Be Truth” and spoke on polygamy in “Whited Sepulchers.”  Her most popular talk was about Joan of Arc, and some people referred to her as the “Civil War’s Joan of Arc.”  She also published several books, the most radical of which was a novel sympathetic to interracial marriage, What Answer? (1868).

By 1891, showed such signs of paranoia that she was involuntarily committed to a Pennsylvania hospital for the insane.  She filed lawsuits upon her release, was adjudicated sane, and recovered damages from newspapers – but the experience shook her self-confidence and ended her career. Fame arguably had come too easily, too early in her life.  Although she was a genuine celebrity and an asset to the Union in the Civil War, Anna Dickinson lived the next forty years in the households of friends, unnoticed and unwanted by the public.  She died just days before her ninetieth birthday.