MATTOON, Ill. — Two summers ago, Bruce Hannon decided to follow in his great-grand-uncle's footsteps during the Civil War.

The journey covered nearly 3,000 miles through six states. But instead of lacing up his hiking boots, Hannon, a retired professor from the University of Illinois, drove over a two-week period in June 2010 to learn about his family roots firsthand.

"I could have walked that, too, over four years' time, but I'm not sure about sleeping on the ground," Hannon said.

He did it to see what his ancestor and his comrades of the 21st Illinois Infantry Regiment, as well as their commanders, saw as they marched into history during the Civil War.

On Jan. 30, 1862, President Abraham Lincoln issues Special War Order No. 1 seeking to prod federal forces into waging all-out war against secession-minded states. Impatient for an all-out offensive, Lincoln's order is essentially directed at the Army of the Potomac and its commander, Gen. George McClellan, whose forces are ordered to open offensive operations by Feb. 22, 1862, with the immediate object of "seizing and occupying a point upon the railroad" in nearby Virginia.

The order, which backs up General War Order No. 1 issued months earlier, underscores the president's growing insistence that federal forces begin a general advance on the Confederacy. The president's order also underscores growing political pressure on Lincoln for a large-scale offensive. Nevertheless, a reluctant McClellan, who has capably organized his army into a fighting force, seeks more time to further equip and organize troops as he completes his own meticulous plan — for a major thrust from the Virginia coast on Richmond, capital of the Confederacy.

McClellan's so-called Peninsula campaign, which ultimately will go down as a failure, is still many weeks off. As January closes, Lincoln's new war secretary, Edwin Stanton, is busy reorganizing the federal War Department. The San Francisco Bulletin reports Stanton "is determined to clear the War Office of all rubbish," has assigned two new assistant secretaries and taken on "much needed reforms." Elsewhere, The Charleston Courier of South Carolina reports the Confederate steamer Calhoun, en route to Havana with cargo, has been chased by a federal cruiser and had to be burned and scuttled — another sign of a tightened federal blockade of Southern seaports.

So, how is it possible that a former president who died 150 years ago would still have direct descendents alive today? As it turns out, the Tyler men were known for fathering children late in life.

Both men are still alive today. That means just three generations of the Tyler family are spread out over more than 200 years. President Tyler was also a prolific father, having 15 children (8 boys and 7 girls) with two wives. He even allegedly fathered a child, John Dunjee, with one of his slaves. Some context on Tyler's progeny: Jane Garfield (granddaughter of James Garfield) is 99, making her the oldest living grandchild of a former president, even though Garfield took office 40 years after Tyler. Former Ambassador John Eisenhower is the oldest living presidential child, turning 89 this past August.

A few other Tyler tidbits:

He joined the South's secession efforts shortly before his death and was even elected to the Confederate House of Representatives.

Because of his Confederate ties, Tyler's is the only presidential death not officially mourned.

Tyler ascended to the presidency in 1841.

Other things that happened that year: Canada became a nation; the United States Senate has its first filibuster, lasting nearly a month; the city of Dallas, Texas was founded. Tyler was the first person to ascend to the presidency through succession as vice president.

Conservation of the Marshall House Flag

SARATOGA SPRINGS, N.Y. — The New York State Military Museum has created a video that shows some of the meticulous work conducted to conserve a flag at the center of a deadly encounter in the opening weeks of the Civil War.

The flag is the large Confederate banner James Jackson flew from the top of his Marshall House hotel in Alexandria, Va., in May 1861. Jackson fatally shot Col. Elmer Ellsworth of Mechanicville, N.Y., after Ellsworth removed the flag from the hotel roof. One of Ellsworth's soldiers then killed Jackson.

Ellsworth, a close friend of President Abraham Lincoln, was the first Union officer killed in the war.

Experts at New York's parks office conserved the tattered flag, which is on display at the state Capital in Albany. The seven-minute video of their efforts has been posted on YouTube.

Confederate Gen. Pierre G.T. Beauregard, who forced the Union surrender at Fort Sumter in 1861 that started the war, is reassigned this week and sent west to Tennessee. The general who also helped lead the Confederacy to victory at the First Battle of Manassas, or Bull Run, was one of the Confederacy's first war heroes. But he had begun to quarrel with Confederate President Jefferson Davis and others and was sent west partly because of that. He would now be the second in command under Albert Sidney Johnston in the Confederacy's Army of the Mississippi.

Beauregard and Johnston sought to better fortify Confederate defenses along the Tennessee and Cumberland Rivers vulnerable to Union attack. But Union Gen. Ulysses S. Grant would eventually take key forts along those rivers in the coming year, isolating the Confederacy from the West. Grant's early triumph at the Battle of Fort Henry on the Tennessee River in February 1862 would mark the first significant victory both for the Union and for Grant, who would later rise to the top military command and ultimately win the war. Elsewhere, Union Navy warships off Hatteras Inlet, N.C., weathered a severe storm this week in 1862.

The Associated Press reports some boats in the fleet of more than 100 ships and vessels were swamped and three lives were lost as Union forces wait for better weather to attack Confederate outposts nearby. "Heavy wind and a rough sea caused our vessels to labor very heavily, and some were obliged to cut loose from the vessels they were towing," the AP dispatch quoted a Union source as stating, adding two Confederate vessels eyeing the fleet were chased off. 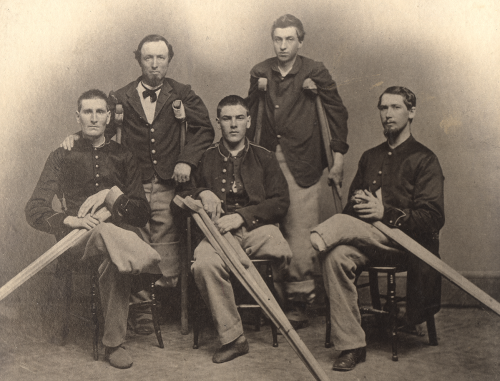 Last year marked the 150th anniversary of the first gunshots of the Civil War -and the first gunshot wounds. As it turns out, the bloodiest war in American history was also one of the most influential in battlefield medicine. Civil War surgeons learned fast, and many of their MacGyver-like solutions have had lasting impact. Here are some of the advances and the people behind them.

By Chip Rowe,  from the November-December 2011 issue of mental_floss magazine.

Silas Chandler has become the focal point for the claim that thousands of Black Southerners fought for the Confederacy. Kevin Levin and Mira Chandler-Sampson, a descendant of Silas Chandler, were recently interviewed on the Voice of Russia. Myra's stories are a poingant reminder that history is, at its heart, always deeply personal.

History or Internet myth?  Listen to the Voice of Russia interview and decide for yourself.
Magazine cover from Civil War Memory

The Central of Georgia Railroad and Banking Company brought economic growth to Savannah by transporting cotton from the heart of the state to be shipped from the Port of Savannah.

During the Civil War, however, the role of the railroad began to change. With port shipments effectively cut off by the Union blockade, the transportation needs changed. Troops, supplies, artillery and prisoners of war were moved through Georgia by way of the railroads.

Members of the group followed through with plans to hold up Confederate flags in the city, in honor of Lee-Jackson Day in the Commonwealth Smith, 89, who died Jan. 7, was the daughter of Thomas Jefferson Denney, a soldier who fought in the Civil War as part of Company H in the 31st Alabama Infantry regiment. Smith's brother, Tyus, lives in Tarrant and is in his 90s.

Continue reading at The Birmingham News