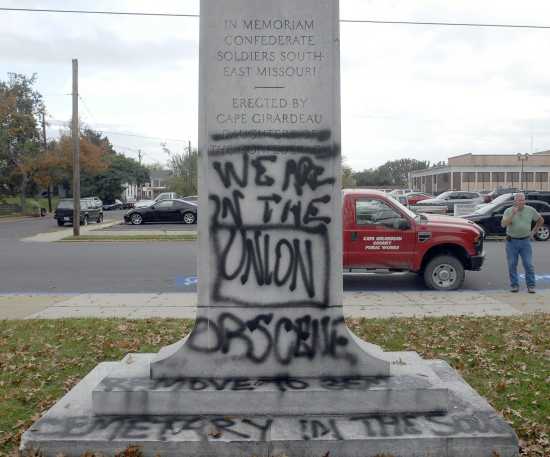 A Civil War monument on the grounds of the Common Pleas Courthouse in Cape Girardeau was struck by vandals who spray-painted both sides of the shrine with apparent pro-Union sentiments, nearly 150 years after the last shot was fired.

A two-man crew scrubbed black paint off the monument Tuesday morning. The men, from Marble Hill, Mo.-based Liley Monuments, said they hoped it would be graffiti-free by Tuesday afternoon.

But the message could still be read early Tuesday afternoon. "Go south" was written on the front of the shrine that sits along Lorimier Street near the fountain. That apparently was a request that the marker be moved, not a pro-South message. "We are in the union," read the words on the back. "Obscene. Remove to [illegible] cemetary (sic) in the south." 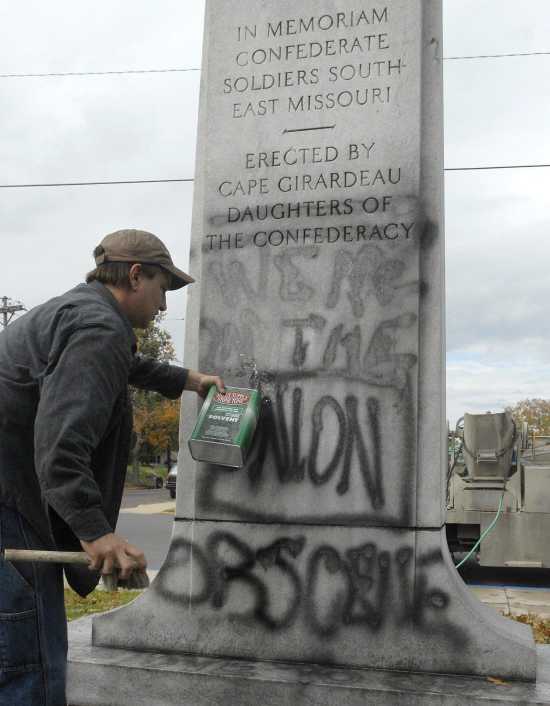 Jeff Abernathy with Liley Monument Works douses the graffiti on the Civil War monument in the courtyard of the Common Pleas Courthouse with industrial solvent Tuesday morning, October 11, 2011 in Cape Girardeau. The estimated cost of the removal of the graffiti will be between four and six hundred dollars.
(Laura Simon)

The workers from Liley said Tuesday afternoon they had tried industrial solvent and paint thinner, and the words were faded but still visible. One of the workers said getting the paint completely off Tuesday didn't "look favorable," but they would continue working through the afternoon.

By 3 p.m., a blue tarp had been wrapped around the monument and the workers were gone.

Two officers with the Cape Girardeau Police Department responded to a 7:30 a.m. call from employees of the nearby Southeast Missourian who first noticed the graffiti. Two officers looked over the property shortly before 9 a.m., checking trash receptacles for paint cans.

Cape Girardeau police spokesman Darin Hickey said no suspects were in custody Tuesday afternoon. Police are investigating the matter, he said, talking to residents of the nearby neighborhoods and checking for any exterior cameras.

When asked how likely it was that the culprits would ever be caught, Hickey said: "We're going to try. But it's going to be pretty tough."

Meanwhile, some with interest in history were miffed.

"All vandalism is bad, but as a Civil War buff, I'm pretty disturbed," said Scott House, a member of the Civil WarRoundtable and a re-enactor. "The war has been over for almost 150 years. People should get over their hate issues on whatever side they have. It's hard to tell why somebody would do something like that."

The 14 1/2-foot-tall monument was first erected in the city in 1931 by the United Daughters of the Confederacy to commemorate the one Confederate unit gathered from Cape Girardeau during the Civil War. The hand-carved monument, which weighs 12 1/2 tons, was moved from its original spot on Morgan Oak Street to the courthouse grounds in 1995 by theCivil War Roundtable.

Passers-by expressed distaste at the graffiti, regardless of the message's content. A family that was celebrating the official adoption of a 2-year-old South Korean child moved around the courtyard so that the vandalism wasn't in photos that were being taken.

"It's awful," said James Slinkard of Jackson, the grandfather of the newly adopted baby. "We were shocked. You hate to see that happen. If they're not caught, you can probably expect more of it."

Cape Girardeau County public works director Don McQuay was noticeably peeved as he surveyed the damage. He said it would cost the county between $400 and $600 to pay Liley to use an industrial-grade solvent to remove the paint.

"That's taxpayer money," McQuay said. "I don't understand why somebody would want to tear up public property. It's their property. They're destroying their own property."

When asked what he would say to those responsible if he had the chance, he said: "You don't want to know."