By GEORGE B. KIRSCH 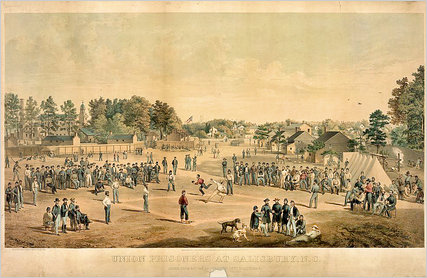 In late March and early April 1861, ballplayers in dozens of American towns looked forward to another season of play. But they were not highly paid professionals whose teams traveled to Florida or Arizona for spring training. Rather, they were amateur members of private organizations founded by men whose social standing ranged from the working class through the upper-middle ranks of society. There were no formal leagues or fixed schedules of games, although there were regional associations of clubs that drew up and enforced rules for each type of bat and ball game. Contests between the best teams attracted large crowds (including many gamblers), and reporters from daily newspapers and weekly sporting magazines wrote detailed accounts of the games.

The English national game of cricket was the first modern team sport in the United States. During the 1850s, an estimated 10,000 English immigrants and native-born men and boys founded about 500 clubs in at least 22 states in the Union. By 1861, Philadelphia had become the cricketing capital of the nation, boasting the most organizations and the largest contingent of proficient, American-born players. But cricket also faced major challenges from two upstart versions of baseball that had recently exploded in popularity. “The Massachusetts game” reigned supreme in Boston and most of New England, while “the New York game” ruled Manhattan, Brooklyn and New Jersey.

The Massachusetts game matched sides of eight to 15 men on a square field with bases or tall stakes (up to five feet high) at each corner, generally 60 feet apart. The batsman stood midway between first and fourth base and tried to hit a ball thrown swiftly overhand by a pitcher who stood in the middle of the square, often only about 30 feet away. The batter could strike the ball in any direction, since there was no foul territory. After swatting the ball, the batsman ran around the bases until he was put out or remained safely at a base. Generally he tallied a run each time he arrived safely at a base, but in some matches a run counted only when a runner arrived safely at home. The batter could be put out if he missed three pitched balls, or if a ball he hit was fielded on the fly, or if he was struck by a ball thrown at him by a fielder while he was between bases. One out usually ended an inning, and the first team to score a fixed number of runs (sometimes as many as 100) won the game.

The origins of the New York game dated back to the mid-1840s, when members of the New York Knickerbocker Base Ball Club experimented with new regulations to govern their play. During the late 1850s, several conventions of New York City ballplayers modified the original Knickerbocker rules. The newest code mandated a diamond instead of a square for the bases, which were placed 90 feet apart. The batsman stood at home plate, at the bottom point of the diamond. The pitcher delivered the ball to the batter underhand from a distance of 45 feet. A ball knocked outside lines drawn from home to first and third bases (and extending beyond each base) was declared foul and out of play. A striker was put out when a fielder caught a hit ball on the fly or the first bounce, or if a fielder held the ball on a base before a runner arrived, or if a fielder touched a runner with the ball while he was between bases. Throwing the ball at base runners was prohibited, three outs retired the side and nine innings decided the outcome of the match, provided that the teams had an equal number of outs.

Cricket and the two types of baseball received a mixed reception south of the Mason-Dixon line. Southern plantation owners showed little interest in ballgames, which they dismissed as Yankee imports that were antithetical to their culture. Many southern towns were equally indifferent. Richmond, Va., is a prime example.

Henry Chadwick was a cricket enthusiast and pioneer sporting journalist who later earned fame as “the father of baseball.” In 1848 he married a young lady from Richmond, and for the next dozen years he tried to stir up interest in both cricket and baseball in that city, especially because of its good fields and abundance of young men of leisure. In late March 1861, The New York Clipper published a notice that advised any interested young men of Richmond to contact “H.C.” at the journal’s office. Chadwick still hoped that a baseball nine might be organized by mid-April. But a few weeks later the firing on Fort Sumter and the ensuing war spoiled Chadwick’s campaign to initiate baseball in the city that soon became the Confederate capital. 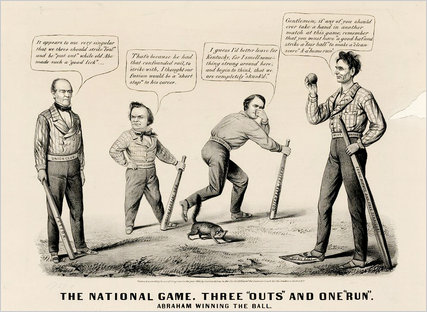 Library of CongressA pro-Lincoln satire from 1860 in which the future president has defeated, from left to right, John Bell, Stephen A. Douglas and John C. Breckinridge. CLICK TO ENLARGE

But in the upper and lower South cricket and both the New England and New York City versions of baseball gained followers, especially in those cities that had strong commercial ties with northern business and financial firms. Cricketers founded clubs in Baltimore, Savannah and New Orleans. A visit by the famed Brooklyn Excelsiors sparked the creation of several baseball clubs in Baltimore, while Washington, D.C., inaugurated the Potomac and National clubs. In 1859 a baseball boom in New Orleans produced seven teams, with two more added the following year. In the southwest. St. Louis had five baseball nines. Most teams initially observed the Massachusetts rules, but by 1860 all had switched to the New York version. Publicity provided by New York sporting magazines and active promotion by New York City-based merchants and bankers boosted the New York game over its New England rival.

As military action between the North and the South loomed, sportswriters highlighted the analogy between America’s first team sports and warfare. Yet they were also aware of the crucial differences between play and mortal combat. In March 1861, The New York Clipper anticipated the impending crisis:

Cricket and Baseball clubs … are now enlisted in a different sort of exercise, the rifle or gun taking the place of the bat, while the play ball gives place to the leaden messenger of death. Men who have heretofore made their mark in friendly strife for superiority in various games, are now beating off the rebels who would dismember this glorious “Union of States.”

Thousands of members of northern cricket and baseball clubs volunteered for service in the Union Army, while a handful chose the Confederate side. In Cincinnati, Abraham G. Mills, a future president of the National League, packed a bat and ball with his Army gear before reporting for military duty. In late May Wilkes’ Spirit of the Times reported that the pitcher of St. Louis’ Union club planned to resign from his team to accept a commission in the Second Missouri Artillery after leading his team to victory in a city championship match. According to that paper, his fans hoped that “the balls he will pitch at the foes of his country’s flag, may be as successful in putting down their insolent presumption, as were those pitched against his civil opponents yesterday,” the former champions of St. Louis.

In New York City, where a stunning patriotic outburst reversed that metropolis’ strong antebellum pro-southern sentiment, many sportsmen put ethnic and political divisions aside to rally to the flag. The Clipper enthusiastically backed Lincoln’s call for troops, and published the names of enlistees, including ballplayers. It praised those who had signed up, and urged others who were slower to act to follow their example. “Better join in boys,” it advised the slackers, “than be loafing the streets or hanging around bar-rooms, and thus show the people you have some noble traits that atone for whatever bad ones you get credit for.” Otto W. Parisen, a member of the Knickerbockers, received a commission in July as Captain in Company C and Quartermaster of the Ninth Infantry Regiment, New York Volunteers. He survived the Battle of Antietam, was honorably discharged, and was commissioned again as first Lieutenant, Company F in the 122nd Infantry Regiment, New York Volunteers. He served for the duration of the war, mustering out in June 1865.

Over the course of the war a steady stream of members of northern baseball clubs joined the Union Army. But in one notorious case, midway in the war, the Brooklyn Excelsiors’ star first baseman defected to the Confederate Army. While 91 members of the Excelsiors volunteered to fight to preserve the Union, A.T. (“Aleck”) Pearsall, a successful physician, slipped out of Brooklyn sometime during the winter of 1862-63. He reappeared in Richmond as a brigade surgeon. There he treated a few Union prisoners, including some former teammates from the Excelsior Club. When word of his current position and whereabouts reached Brooklyn, the Excelsiors promptly expelled him.

Rural southerners who enjoyed playing informal forms of early baseball enlisted in the ranks of the Confederacy, as did a few members of baseball clubs in New Orleans. As Johnny Reb and Billy Yank prepared themselves for battle in army camps, they sought distraction and diversion on cricket or baseball grounds. Time and good luck would determine the outcome of the rebellion, and who would live to a ripe old age, and which form of ballplaying would defeat its rivals during four years of sectional strife and emerge as America’s national pastime.

George B. Kirsch is professor of history at Manhattan College and the author of “Baseball and Cricket: The Creation of American Team Sports, 1838-72” and “Baseball in Blue and Gray: The National Pastime During the Civil War.”